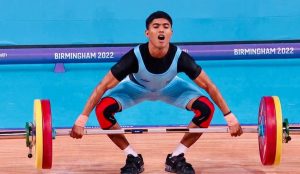 The career of Sanket Sargar:

Maharashtra’s Sanket Sargar, who took up wrestling when he was 13-year-old, has been finishing on the podium at major international events, including the Commonwealth Weightlifting Championships 2021 in Tashkent, helps his father, who owns a pan shop and a food stall in Sangli, Maharashtra.

Re-Envisioning State Cyber Response Capabilities: The Role of Volunteers in Strengthening our Systems