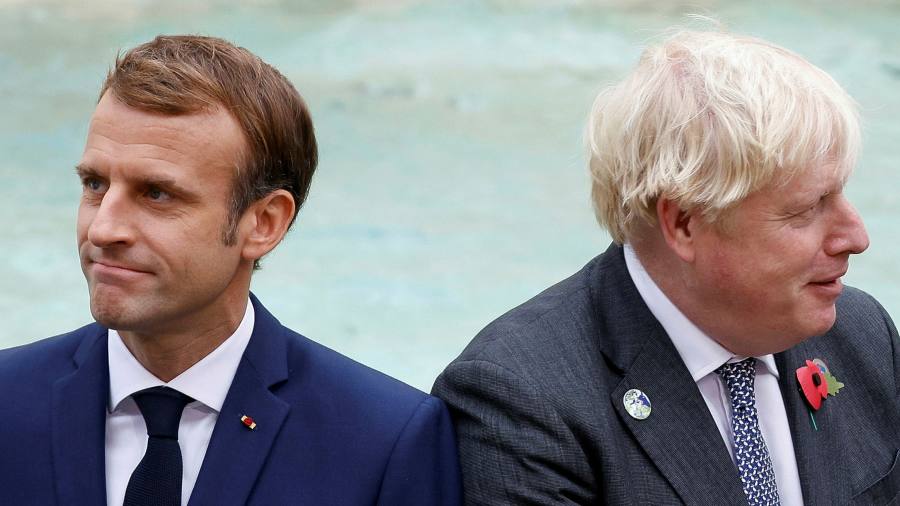 The UK and France remained at odds on Sunday over the deepening diplomatic spat on post-Brexit fishing rights, as both countries said the onus was on the other to find a solution.

French president Emmanuel Macron and Boris Johnson, the UK prime minister, held a 30-minute tête-à-tête on the margins of the G20 summit in Rome, but Downing Street and the Elysée Palace released contrasting statements on the meeting.

Tensions over fishing rights have been simmering for months after the UK failed to issue permits for some small French boats to fish in British waters under the Brexit agreement.

Paris on Wednesday announced it would increase customs and sanitary controls on freight, make stricter checks of trucks coming in and leaving France, and ban trawlers from landing their catch in French ports if the dispute was not resolved by Tuesday.

“The ball is in Britain’s court,” Macron said at a press conference in Rome, saying that retaliatory measures would apply if London did not accept the “de-escalation” proposed by Paris.

“We gave them a proposal. And so, if the British keep saying and acting like they don’t want to reach a deal, which was signed, and they don’t start to budge, then it will be regrettable. But we cannot help but respond and stand up for our fishermen.”

French officials said earlier in the day that the leaders would work on “practical measures” in “the next few days” to promote a de-escalation in the fishing dispute.

But Johnson’s spokesperson said “it’s down to France to decide if they want to step away from the deeply concerning threats”.

Johnson also criticised France for a leaked official letter from French prime minister Jean Castex to Ursula von der Leyen, president of the European Commission, that Number 10 described as stating “the UK should be punished for leaving the EU”.

Castex’s letter called on the EU to take further steps in the fishing row, acting in a “firm, united and proportional way”. “We must show clearly that respecting prior agreements is not negotiable and that leaving the EU causes more damage than staying in,” he wrote.

Whitehall officials suggested that the letter had “ruined all trust” between the UK and France. One described it as “the punishment letter”.

Speaking at a press conference in Rome, Johnson said he was “puzzled” by Castex’s letter. “I don’t believe that is compatible either with the spirit or the letter of the Withdrawal Agreement of the Trade and Cooperation Agreement [TCA],” he added.

In an interview with the Financial Times on Friday, Macron warned that the international reputation of the UK was at stake in the dispute over fishing rights and warned that other nations were watching closely.

“Make no mistake, it is not just for the Europeans but all of their partners,” Macron said. “Because when you spend years negotiating a treaty and then a few months later you do the opposite of what was decided on the aspects that suit you the least, it is not a big sign of your credibility.”

France’s Europe minister, Clement Beaune, took to Twitter on Sunday to complain that “we do not lack just a few licences, but more than 40 per cent of French detailed requests”.

“After 10 months, when such a significant amount of licences, targeting one country, is missing, it’s not a technical issue, it’s a political choice and a breach of the TCA,” he wrote.

Lord David Frost, Johnson’s Brexit minister, said on Twitter on Saturday that the UK would launch dispute resolution proceedings if France implemented further checks on fishing vessels and at the border.

The former UK ambassador to France, Lord Peter Ricketts, said he believed the relationship between France and the UK was at its lowest point in decades, surpassing the dispute over the Iraq war in 2003.

“It’s a case of total collapse of confidence, after so many cases where the British government hasn’t respected its word,” he told the FT.

“The prospect now is of real economic damage and a spiral downwards,” he said.

Donors Near $100 Billion a Year in Climate Aid to Poorer Nations, Kerry Says