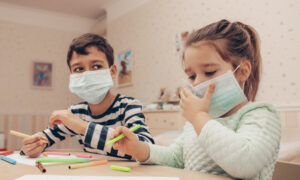 Dr. Avery Jackson, a board-certified neurosurgeon based in Michigan, performs complicated brain surgeries in the operating room as often as four times a week. During these surgeries, which can last for up to eighteen hours, Jackson, who is Chief Executive Officer and Medical Director of Michigan Neurosurgical Institute in Grand Blanc, wears a surgical mask.

While masks make sense in the operating room, Jackson said, people—especially children—should not be wearing masks in their everyday lives.

As Jackson explained to a group of nearly 100 doctors and other health professionals at a two-day medical conference in Conroe, Texas, on April 29, wearing masks outside the operating room creates a host of health problems. Masking, Jackson said during his talk, is especially dangerous for children’s developing brains. That’s because masks can cause people to rebreath a small amount of their exhaled carbon dioxide—over and over again.

Jackson started his talk by sharing research from a team of eight scientists who investigated the effect of carbon dioxide on the brain. Their research, which was published in the American Journal of Physiology in 1957, found that when rats were forced to inhale carbon dioxide at low, medium, and high concentrations, concerning changes in their brains occurred at every level of exposure. Carbon dioxide inhalation even at moderately high levels caused the rats to have brain seizures.

In 2014 scientists found that negative brain effects due to carbon dioxide exposure were even more pronounced for juvenile rats. This research, which was done by a team of Turkish scientists at Dokuz Eylul University in Izmir, and published in the peer-reviewed journal Biotechnic and Histochemistry, found that carbon dioxide exposure markedly impaired brain function, causing problems with memory and spatial learning, and increasing anxiety in adolescent rats.

Although Jackson didn’t reference it in his talk, a study published in 2021 in BMC Infectious Diseases of 11 healthy volunteers who ranged in age between 16 and 54, found that using masks resulted in significantly increased concentrations of carbon dioxide.

While these researchers concluded that the elevated levels “should not be a concern” for health care providers, they pointed out that “the clinical implications of elevated CO2 levels with long-term use of face masks needs further studies.”

A study published in April in BMC Anesthesiology looked at the effects of wearing surgical masks on patients being given oxygen via an oxygen mask placed over a surgical mask and found that oxygen was significantly lower after five minutes and their carbon dioxide levels higher.

Another study published in April by the Royal Academy of Medicine in Ireland’s Irish Journal of Medical Science looked at health care workers and noted an increase in carbon dioxide levels in the emergency department health care staff wearing N95 masks without a break for between 0 and 4 h. They suggested that this change “should be noted in terms of PPE-induced hypoventilation.”

Another April 2022 study, published in the German journal Lung, looked at the effects of vented and non-vented masks on patients being treated for hypercapnia,  a condition of abnormally elevated carbon dioxide levels in the blood. The researchers warned that “CO2 rebreathing from the mask … could influence the effectiveness of the ventilation.”

According to Jackson, there’s already ample evidence that the use of face masks is unhealthy. Any kind of oxygen restriction, Jackson said, may have negative brain effects, reducing neural activity and increasing learning problems and anxiety in some people.

Furthermore, the findings in the scientific literature dovetailed with what Jackson saw with his 8-year-old daughter, as well as some of her classmates. After the school forced all the children to wear masks, Jackson reported, his daughter developed headaches, began having difficulty concentrating, and started getting bad grades.

Jackson said that masking made another child at the same school feel so anxious that she threw up, twice, inside her mask. Despite this, the teachers insisted the child had to wear it.

“Our children are having significant cerebral dysfunction when they wear masks,” Jackson said, adding that the problems created by masking are both neurological and emotional.

Several studies have shown that babies and small children born during COVID—at a time when adults and children have been masking—are exhibiting myriad signs of developmental delays.

According to a preprint of a longitudinal study done by researchers at Brown University in Providence, Rhode Island, the verbal skills of babies born during COVID have gone down.

“We find that children born during the pandemic have significantly reduced verbal, motor, and overall cognitive performance compared to children born pre-pandemic.”

Led by Sean Deoni, an associate professor of pediatrics at Brown University, the research included 672 Rhode Island children, 308 born before January 2019, 176 born between January 2019 and March 2020, and 188 born after July 2020. The study found that babies had markedly worse cognitive, verbal, and motor skills than their counterparts born before COVID.

The researchers found that even in the absence of direct SARS-CoV-2 infection and COVID-19 illness, the environmental changes associated with the COVID-19 pandemic “significantly and negatively affect[ed] infant and child development.”

Another study found that COVID-era infants were less relational and vocal than babies born pre-pandemic. Put differently, COVID babies don’t talk, babble, or coo as much as they should. As these vocalizations are precursors to speaking, these observations suggest that COVID babies may be verbally delayed compared to their peers.

“Early talk is one of the most important factors shaping children’s brain development during the first few years of life,” LENA, the nonprofit that conducted the study, explained on its website.

According to Harvard University, early experiences lay the foundation for future learning, behavior, and health in children. Compromising brain architecture early in life can have a profound effect on a child’s future.

“Just as a weak foundation compromises the quality and structure of a house, adverse experiences early in life can impair brain architecture, with negative effects lasting into adulthood,” Harvard’s Center on the Developing Child explains. Wearing masks in school, social distancing from peers, and losing over two years of normal childhood development amid a worldwide panic-raising pandemic would seem to count as an adverse experience.

Though researchers and public health officials continue to defend the use of face masks, masking children as well as adults wearing masks around children may be one main reason for the developmental delays babies and small children have been experiencing during COVID.

Masking raises carbon dioxide levels in the body. Masking also makes it impossible for babies and small children to learn to read facial expressions, which in turn impedes language learning and emotional intelligence.

“Faces are a complex and rich source of social, emotional and linguistic signals,” wrote David J. Lewkowicz, a senior scientist at Haskins Laboratories and an adjunct professor in the Yale Child Study Center at Yale University in an article for Scientific American. “We rely on all of these signals to communicate with one another through a complex and dynamic dance that depends on each partner being able to read the other’s signals.”

Lewkowicz’s work found that babies learn to lip-read when they’re around eight months old, which is a crucial step in learning to speak as well as to understand speech.

Adults of all ages have difficulty understanding what other adults are saying when they’re wearing masks—both because it is harder to hear a person speak through a mask and because much of the speaker’s face is not visible, making it difficult for the listener to read facial expressions and emotions. This is one possible explanation of why babies born during a time when most people in public places in America were masking have been experiencing cognitive delays.

Nearly two dozen countries have dropped mask mandates. According to Jackson, the cognitive harms caused by masking children clearly indicate that children should not be forced to wear masks.

“Our children are having significant cerebral dysfunction when they wear masks,” Jackson said. “Now that we have knowledge, we have to do something about it. We know this is destructive for our kids.”