The Muppets Make a Surprise Appearance on ‘Saturday Night Live’ 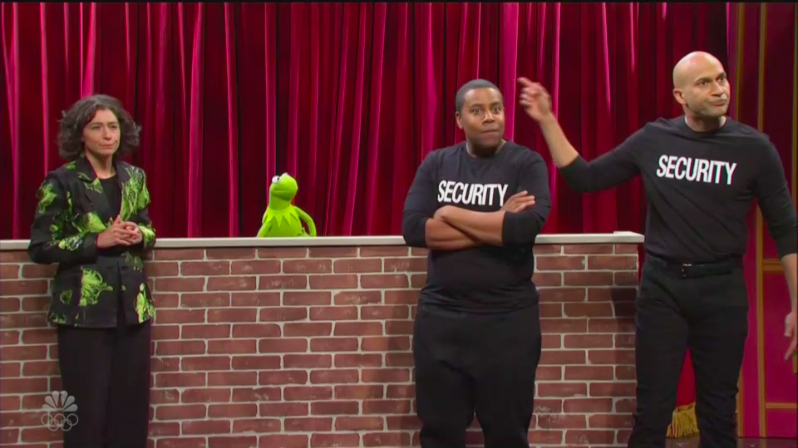 In a sketch spoofing “The Muppets” on “Saturday Night Live’s” penultimate episode of Season 46, a couple of the actual classic puppets made appearances.

Kermit the Frog kicked things off, of course, as the host of “The Muppet Show,” but Statler and Waldorf were along for the ride as well, always ready to provide a heckle, such as replying to Kermit calling Melissa Villaseñor’s Lily Tomlin “a show stopper” by saying, “I’d do anything for this show to stop.” However, in today’s climate, not every heckle was the perfect one.

When Kermit said the show would be a blast, the response was, “Yeah because it’s a bomb,” which had two members of security (played by cast member Kenan Thompson and guest host Keegan-Michael Key) come out to dress them down.

And once security took note of these two disruptors, they kept their eyes on them all night.

“We work for the venue,” Key said. “Everybody paid good money to hear this little dragon and his friends do they’re thing. So please let them do their thing without talking.”

Key also reminded Statler and Waldorf they “were more than welcome to leave,” rather than continuously complain about a show they thought was bad. The O.G. hate-watchers just couldn’t learn their lesson, though, and eventually Key joined them up in the balcony and beat up Statler, resulting a new version of the puppet, with purple, swollen-shut eyes to finish out the sketch.

When Statler than said he couldn’t see the stage through his injuries, Waldorf noted he wasn’t missing much, which resulted in Thompson beating him up. But when both security officers went to remove the men, they pulled them out of their seats to reveal they didn’t have legs.

“We didn’t know that y’all was veterans,” Thompson said.

By the end of the sketch, Thompson and Key came around to Waldorf and Statler’s sense of humor, with Key even trying to get in on it, calling Kermit “Kramer” and then simply saying, “You’re stupid.”

And with that, Waldorf and Statler found something they actually liked.

This Casual Bodycon Dress 'Made Me Look 10 Pounds Lighter'