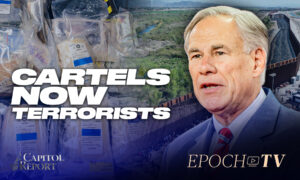 Long-awaited action on police reform unfolds in Congress: a package of bills that Democrats say is the answer to rising crime, but Republicans say the timing is telling.

We spoke with Idaho Congressman Russ Fulcher about the Democrats’ efforts to fund the police and what he is hearing from the American people in his state of Idaho ahead of the midterms.

Texas Gov. Greg Abbott is stepping up the effort to crack down on fentanyl coming across the border. He’s blaming Mexican cartels for the current crisis.

Big bank CEOs were grilled over what they would do if China invaded Taiwan, as lawmakers warn them about funding the communist regime.

Former President Donald Trump is responding to the lawsuit filed against him by the New York attorney general. He calls it another witch hunt.

The pandemic ushered remote learning, opening the door for parents to see what their children have actually been learning in school. What they found out might surprise you.

Ukraine blames Russia over blackouts in the midst of an offensive

Most costly cities in India for foreigners