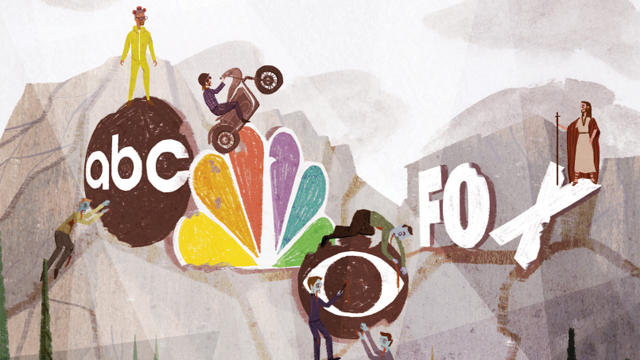 The largest TV networks are getting ready to snare billions of dollars from Madison Avenue. And lose them, all at the same time.

Expectations are high for the industry’s annual upfront, when TV networks try to sell the bulk of their commercial inventory for the upcoming season. With the coronavirus pandemic lifting, TV executives believe they have moved past the lows of last year’s difficult negotiations with ad buyers  and onto a brighter day when most sectors of the economy are ready to spend heavily again on marketing messages.

The annual springtime ritual of programming presentations for ad buyers will be virtual this year, kicking off on Monday with events for NBC and Fox. Disney’s many platforms take the stage on Tuesday, as will Discovery and Univision. CBS and WarnerMedia go on Wednesday.

“We are seeing great strength in the markets, not just from a pricing point of view, but also from a volume point of view,” said Fox Corp. CEO Lachlan Murdoch, speaking to investors earlier this week. “The budgets are bigger and more significant than we would have expected,”

Here’s the catch: A good chunk of that money will have to go to a dizzying array of streaming venues like NBCUniveral’s Peacock, Discovery’s Discovery Plus, ViacomCBS’ Paramount Plus, WarnerMedia’s HBO Max, Disney’s Hulu and Fox’s Tubi. Simply put, live viewership for linear TV has fallen so much that the networks cannot give their advertisers the ratings guarantees they crave unless they can get them to commit to streaming views as an add-on.

“Demand is outpacing the available supply they have to offer. That’s just a fact,” said Geoffrey Calabrese, chief investment officer for Omnicom Media Group North America, told Variety. “Ratings have eroded to a point where clients’ desire to find impressions in the linear space is too high.”

No one disputes that the networks are likely to see healthy spending. But some executives caution that the largest TV platforms may overplay their hands by demanding stratospheric pricing increases for commercials and sponsorship deals on both linear and streaming outlets.

NBCUniversal has made no secret of the fact that it believes streaming video represents the new primetime. Ad buyers say the company is in some instances seeking eye-popping increases of around 50% in CPMs — the cost to reach 1,000 viewers, a unit that is central to the annual upfront negotiations — for ads on Peacock. The CPM rates for HBO Max are said to, in some cases, be even higher. Both services promise very low ad loads, which makes the commercials scarce and lends impetus for higher rates. Hulu, which carries a heavier ad load, is not seeking such high CPM hikes, buyers said.

“You have some targeting capabilities in digital. What you don’t have is the mass scale that linear offers. If you’re going to argue to me that you should get these rich CPMs, I have a tough time swallowing that,” said Calabrese. The networks, he suggested, need to determine if they want spectacular price increases or significant upticks in the volume of ad dollars they collect. They may not get both.

The networks will also be pressing for significant CPM hikes for linear TV. Last year, with money being taken off the table amid the economic uncertainty of the early pandemic, TV’s leverage waned. The biggest networks could only muster hikes in the low-single-digit percentage range. The networks are hell bent on returning to double-digit increases this year, buyers report.

Simply put, the networks need to sell their linear inventory for top dollar. The prices commanded by old-fashioned linear TV commercials is still significantly higher than digital or streaming ads, which do not snare the same big, live audiences all watching the same program simultaneously. And if the CPM hikes are too much for some to bear, the networks will be happy to sell to a swelling army of new direct-to-consumer advertisers like Wayfair, Casper or Warby Parker. These are brands that established themselves online and now need to build the kind of mass awareness that big-name products like Tide, Lysol, Apple et al enjoy.

These upstarts don’t have the deals that some of their older counterparts have. Longtime TV sponsors benefit from old agreements that limit the rate hikes they must pay each year. If you’re a network ad-sales chief, you’d much rather sell your TV time to a new digital advertiser who will pay a big pricing increase, rather than a Procter & Gamble or State Farm, who probably won’t.

The networks will need to tread carefully. There may be more cash on the table, but it’s not clear it will reverse the downturn of last year’s upfront, where Variety estimates primetime ad commitments for the five English-language broadcast networks fell 9.3% to 14.6%, to between $8.2 billion and $9.8 billion, compared with between $9.6 billion and $10.8 billion for primetime in the 2019-2020 season. It was the first time since 2015 that the level of those commitments sagged.

To win this year, the big media companies ought to consider not only if they can notch gains, but whether than can do so without making clients feel like they’re being fleeced. An advertiser who agrees to steady increases and bigger budgets year after year is surely better than one who walks away after submitting to an outrageous deal in a single session.

YOUNG AND IMPRESSIONABLE:  One of the immutable laws of television holds that people between the ages of 18 and 49 are the most desirable viewers to reach. This year, the networks want to loosen that definition.

All the networks are engaged in discussions about getting paid based on total impressions, rather than on a “demo” that targets younger viewers. In the past, advertisers focused on people between 18 and 49 or, in certain cases, viewers between 25 and 54. Now, the networks say those younger crowds are more readily available on digital.

A+E Networks has already been making the rounds of media buying agencies, proposing a “total audience currency” that lets the company get paid based on the total number of people watching its TV outlets. If advertisers want, they can delineate specific audience goals — by age, gender, predisposition to buy a certain product, response — on top of those deals. According to media buyers, similar concepts from other media companies are also making the rounds.

Local TV stations have been at this for months. As the audiences for local programs winnow, big station owners — including those owned by NBC and Nexstar Media — have moved to impressions-based systems across the board.

Advertisers still want younger consumers. But the media companies are making it plain that capturing them via their main linear product is getting harder to accomplish.

PLEASE PROVIDE RECEIPTS: Tracking the flow of upfront ad dollars has always been a tricky task. The rise of streaming may well make any such endeavor impossible.

There is no official tally of upfront ad commitments. For years, one way to try and gauge the networks’ sales efforts was to compare primetime activity across the board. That’s where the most expensive ads are sold and, as such, makes a decent proxy for how the media industry fared in its efforts to win billions for commercials.

But primetime these days is whenever an individual viewer says it is. A fan of “This Is Us” or “Young Sheldon” can watch a single episode or binge through many at times of his or her own choosing. As advertisers are forced to spread their dollars from linear daytime, primetime and late-night to streaming, the comparisons between networks are harder to make. NBCUniversal, Fox, WarnerMedia, ViacomCBS and Disney all have different portfolios of assets that command varying levels of price and volume.

The entrepreneur and former media analyst Tom Wolzien used to try to corelate upfront totals whispered by the networks to the press to actual ad-revenue results disclosed in quarterly and annual reports. His determination? “I couldn’t find any correlation whatsoever to reality,” he said in 2004. In 2021, that connection is likely to become even more tenuous.

Checking the Receipts from Pandemic-Related Spending

What did you play last week&quest;