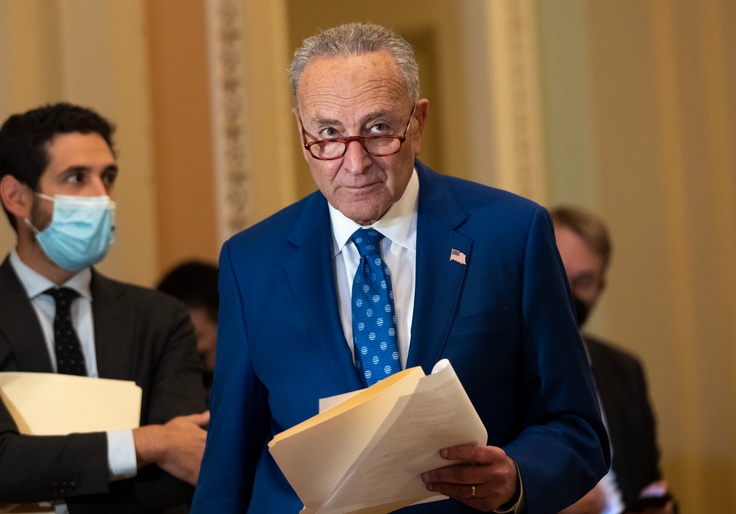 Democrats on Wednesday failed to codify Roe v. Wade in a Senate vote on a bill that would have allowed doctors nationwide to abort fetuses nine months into a pregnancy.

The Women’s Health Protection Act failed to garner a majority of the vote, with a 49-51 tally, and fell well short of the 60-vote filibuster threshold. Sen. Joe Manchin (D., W.Va.), who voted against the bill, was the only member to break party lines. The bill aimed to overturn all pro-life laws across the country—making it the most pro-abortion piece of legislation in history.

Senate Majority Leader Chuck Schumer (D., N.Y.) held the vote in response to a leaked Supreme Court draft this week that revealed a majority of justices support overturning Roe v. Wade. If the Court follows through with the ruling, it will allow states to restrict abortion prior to the current threshold of fetal viability, which is roughly 24 weeks.

The House in September passed the bill with support from all but one Democrat, Rep. Henry Cuellar (Texas). The bill states that doctors can abort babies up until birth if they determine a continuation “would pose a risk to the pregnant patient’s life or health.”

The Senate in February failed to advance the bill, but Schumer nevertheless forced a vote on the Senate floor. Manchin was the only Democrat to vote against advancing it.

A majority of Americans oppose abortion access in the second and third trimesters, according to an Associated Press poll published last year. The Supreme Court abortion case regards Mississippi’s 15-week ban—a threshold that falls within the second trimester.

Man rapes pregnant woman after being released that same week for raping another woman...

Confessions of a Social-Justice Meme Maker

De Blasio may be planning a congressional bid