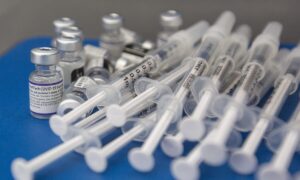 By all accounts, Lauren Morgan Tweedale had a bubbly personality. She was outgoing, loved to sing karaoke, and to go to the gym with her buddies. Forty-seven years old, Tweedale was also trim and healthy. So it was a huge shock to her family and friends when last year, on the morning of April 6th, 2021, she was found unresponsive in her bed.

The doctors told the family that Tweedale died of a sudden cardiac event. However, just eight days before she died, Tweedale had gotten her first dose of the Pfizer mRNA vaccine against COVID-19.

To date, well over 300 million doses of the Pfizer vaccine have been administered in the United States, according to Statista.com. While millions of people have had these vaccines with only temporary, mild, or even no side effects at all, 1,255,353 reports of adverse events have been concerning enough to be submitted to the American government’s data collection system, as of April 29, and at least 300,000 of these reactions appear to be severe.

Tweedale’s sudden death, along with 27,757 other deaths that are temporally associated with the COVID vaccines, has also been reported to the Vaccine Adverse Events Reporting System.

“The vaccine killed my wife’s best friend. She was the maid of honor at our wedding,” insisted Dan McDunn, a contractor, mountain bike coach, and father of three, when he spoke to The Epoch Times. “This was not some random cardiac event.”

A Flurry of Sudden Deaths

In the months after Tweedale died, McDunn and his wife, Sabra, a registered nurse, started researching vaccine safety.

But it wasn’t just their best friend’s death that had them so concerned. They also became aware of what McDunn called a “flurry of sudden deaths” among their friends.

Another dad McDunn knows, 39, got up in the middle of the night to feed his newborn and collapsed. Then his business coach’s best friend also died, as did his eighth-grade crush’s husband, as well as four high school students from his son’s school.

There is no way to know for certain if any of these sudden deaths are connected to the COVID vaccines. But, McDunn said, these deaths catapulted him into digging deeper to find out what happened to Tweedale.

Not A Causal Relationship

The Vaccine Adverse Events Reporting System, VAERS, relies on medical professionals and the general population to report their personal experiences with vaccine side effects.

Before gaining access to it, consumers are required to read and agree to the CDC’s disclaimer: VAERS raw data does not imply or prove a causal association.

In other words, correlation does not mean causation—a mantra that is often repeated by scientists and statisticians alike. Just because two things correlate to each other—say you know five people named Jason who all drive the same brand of Hondas—does not mean that one thing causes the other.

At the same time, correlating data, especially health data, can help researchers suss out potential safety issues with any given medication or vaccine.

“VAERS is a passive reporting system, meaning it relies on individuals to send in reports of their experiences to CDC and FDA. VAERS is not designed to determine if a vaccine caused a health problem, but is especially useful for detecting unusual or unexpected patterns of adverse event reporting that might indicate a possible safety problem with a vaccine. This way, VAERS can provide CDC and FDA with valuable information that additional work and evaluation is necessary to further assess a possible safety concern.” [our emphasis.]

When you search both national and international databases, you quickly see that most vaccine lots have maybe one or two adverse events associated with them. Usually these adverse events are mild: an upset stomach or sore shoulder may be reported, for example.

Not so with Pfizer’s EN6201, the lot that Tweedale was given. When McDunn first starting looking into it, in early January, he found that the lot number of Tweedale’s vaccine was associated with 90 deaths in the United States.

Since then, that number has grown. As of May 9, 2022, when The Epoch Times accessed it, Pfizer’s EN6201 was linked to 167 deaths and 3,349 adverse events. When we conducted a search a different way, we found an even higher number of deaths and side effects.

McDunn believes a single lot number associated with nearly 170 deaths should be cause for concern. At the same time, statistically speaking, we would need to know how many doses of that lot have been given.

“You would need to know the size of each COVID vaccine lot to make a meaningful reactivity comparison between lots, but the size of lots is not publicly available,” pointed out Barbara Loe Fisher, co-founder and president of the National Vaccine Information Center, a non-profit organization established in 1982 to promote vaccine safety through public education.

Fisher, who has been a vaccine safety advocate for 40 years, told The Epoch Times that she is most concerned about the fact that out of some 2,125,000 adverse event reports filed with VAERS for all vaccines given to children and adults since 1990, COVID-19 vaccines have generated over 1,255,000 of those reports, with about 730,000 related to the Pfizer/BioNTech mRNA COVID vaccine.

“These are astonishing statistics and they confirm that the new COVID vaccines are highly reactive, regardless of how many VAERS reports are connected to different lots,” Loe wrote in an email.

Pfizer, however, does not believe there are safety issues with their vaccine.

“Regulatory authorities around the world have authorized the Pfizer-BioNTech COVID-19 vaccine and expert medical committees have and continue to review the data and recommended it,” Pfizer Media Relations wrote in a statement to The Epoch Times.

“Every dose of the vaccine is manufactured under the strictest of control measures to ensure consistent identity, quality, purity and potency for optimal patient safety and efficacy. With more than one billion doses of the vaccine administered around the world, the safety profile for the vaccine for all authorized groups continues to be favorable.”

Vaccines are mass produced in batches. Each batch is labeled with a lot number.

Sometimes, because of problems with the lot some batches of vaccines provoke more reactions and severe side effects than other batches. These issues can occur during manufacturing, safety inspection, and shipping and handling.

Problems may include contamination, inconsistent ingredient proportions, and inadequate temperature control during transportation.

When problems like these affect a batch of vaccines, they’re often referred to as “hot lots.”

In 2013, the pharmaceutical giant Merck announced a recall of one lot of its vaccine, Gardasil (developed to protect against human papillomavirus) after the lot number— J007354—was found to contain particles of glass.

Over 743,000 vials of that HPV vaccine, that were distributed to facilities across the United States between August 20, 2013 and October 9, 2013, were recalled, as reported by CBS News.

That same year a study published in the peer-reviewed journal Pediatrics, found that safety concerns/side effects was one of the main reasons parents chose not to give their children this vaccine.

Other lot recalls include a 2007-2008 recall of several lots of a Haemophilus influenzae type b (Hib) vaccine and a hib/hepatitis B vaccine made by Merck after routine testing showed a possible issue with sterility; as well as a 2012 recall of approximately 39,000 doses of a measles, mumps, and rubella vaccine lot (Lot 0851AA of M-M-R II) that was shipped without adequate internal inspection.

More recently, after finding a vial to be contaminated with a “foreign body,” Moderna and ROVI Pharma Industrial Services announced a recall of 764,900 doses of its European COVID-19 vaccine, Spikevax.

In the past, identifying problems with hot lots have helped manufacturers develop safer vaccines.

As Harris L. Coulter and Barbara Loe Fisher described in their 1991 book, “A Shot in the Dark: Why the P in the DPT vaccination may be hazardous to your child’s health,” the whole cell pertussis vaccine, which was recommended by the CDC for infants until 1996, was associated with hot lots that contained higher amounts of bioactive pertussis toxin and endotoxin.

A clustering of 11 SIDS-diagnosed deaths in infants in Tennessee who had recently received DPT vaccines in 1977 and 1978 caught the attention of the public. Nine of the 11 infants had gotten DPT vaccine from the same Wyeth lot. Statistical analyses revealed that the odds of their DPT-associated deaths being a “coincidence” were extremely low.

Wyeth withdrew the DPT lot in question from the market.

At the same time, the company also stopped future shipping of vaccines from a single lot to the same geographical location. Parents of vaccine-injured children felt Wyeth did this to make it more difficult to identify and trace hot lots.

Fisher told The Epoch times that, like with COVID-19 vaccines, the position of vaccine manufacturers and public health officials at the time was that the DPT vaccines were “safe and effective.” In fact, health authorities dismissed the serious injuries and deaths children experienced after vaccination as unrelated.

This is the DTaP vaccine (to protect against diphtheria, tetanus, and pertussis) that the CDC currently recommends for babies at 2 months, 4 months, and 6 months of age, and then again for toddlers between 15 and 18 months of age, and for school children between 4 and 6 years.

After the change from a whole cell vaccine to an acellular vaccine, the hot lot issue disappeared.

While hot lots are a problem, scientists have also found that individual vaccine vials sometimes have inconsistencies that can compromise both safety and efficacy.

Since there may be variation from vial to vial, a team of Maryland-based scientists recommended that individual vials must be investigated in the event of bad outcomes. Writing in the peer-reviewed journal Vaccine, they explained: “All vials are not the same: Potential role of vaccine quality in vaccine adverse reactions. We suggest taking the quality of individual vaccine vials into account in an adverse reaction investigation, i.e., a serious adverse reaction, anaphylaxis or other types, might be caused by one defective vial out of many good-quality vials.”

Barbara Loe Fisher, the vaccine safety advocate, thinks it is imperative that we investigate the possibility of COVID vaccine hot lots and other safety issues.

Based on clinical trials, “the majority of adults and children who get the COVID vaccine experience some kind of reaction, and many of those reactions at least temporarily interfere with normal activity,” she told The Epoch Times. “Other more serious reactions lead to chronic heart, brain, immune system and other disorders, or end in death.”

The McDunns are now caring for Lauren Morgan Tweedale’s orphaned 16-year-old daughter, along with their own three sons.

“It requires some connection to a bad injury or a death in order to be willing to admit there’s a problem,” McDunn, whose wife has decided not to get any more COVID-19 vaccines, said.

“And even when people have a close contact with an injury or death, they’re still not connecting the dots. I don’t know why. I don’t know how the public health system has done such a wonderful job of demonizing people who are sounding the alarm, either,” McDunn added. “It’s incredible.”

How to Search Vaccine Lot Numbers on VAERS

Antifa Activist Arrested for ‘Racist’ Attacks on Portland Synagogues and Mosque – and Media...

The Neurological Toll of Masks and Lockdowns

Kaepernick to Receive Honorary Degree for ‘Kneeling for the Voiceless’