The lack of a shared set of facts about immigration makes it easy for accusatory and often false messages to echo loudly in the run-up to the midterm elections. J.D. Vance, a leading Republican candidate for Ohio’s open Senate seat, claimed in a recent advertisement that “Joe Biden’s open border is killing Ohioans, with more illegal drugs and more Democrat voters pouring into this country.” Representative Paul Gosar of Arizona has described immigration as “full scale invasion.” Tucker Carlson of Fox News told a guest on his show in 2017: “Go to Lowell, Mass., or Lewiston, Maine, or any place where large numbers of immigrants have been moved into a poor community, and it hasn’t become richer. It’s become poorer. That’s real.”


A new book, “Streets of Gold: America’s Untold Story of Immigrant Success,” by two economists, Ran Abramitzky of Stanford and Leah Boustan of Princeton, should undercut some of the fearmongering. They linked census records to pull together what they call “the first set of truly big data about immigration.”


Using the data set, Mr. Abramitzky and Ms. Boustan were able to compare the income trajectories of immigrants’ children with those of people whose parents were born in the United States. The economists found that on average, the children of immigrants were exceptionally good at moving up the economic ladder.

Immigrants and their children are assimilating into the United States as quickly now as in the past, the economists found. That’s in line with recent research into the effects of immigration. While “first-generation immigrants are more costly to governments than are the native-born,” according to a 2017 report by the National Academies of Sciences, Engineering and Medicine, the “second generation are among the strongest fiscal and economic contributors in the U.S.”


Second-generation-immigrant success stories have long been a part of America’s history. Looking at census records from 1880, the researchers found that men whose fathers were low-income immigrants made more money as adults than the sons of low-income men born in the United States. (They focused on sons because it was harder to track women from one census to the next, since so many adopted their husbands’ names at marriage.) Because of privacy restrictions, they had access to individual data only through the 1940 census. They used other sources for subsequent years.


Mr. Abramitzky and Ms. Boustan observed the same pattern a century later. Children born around 1980 to men from Mexico, India, Brazil and almost every other country outearned the children of U.S.-born men.


“America really does have golden streets that allow immigrants to quickly make more than they could have earned at home,” they write. But, they add, “moving up the economic ladder in America — and catching up to the U.S.-born — takes time.”


Once Mr. Abramitzky and Ms. Boustan found abundant evidence of second-generation immigrants’ upward mobility, they tried to figure out why those children did so well.


They arrived at two answers. First, the children had an easy time outdoing parents whose careers were inhibited by poor language skills or a lack of professional credentials. The classic example is an immigrant doctor who winds up driving a cab in the United States.


Second, immigrants tended to settle in parts of the country experiencing strong job growth. That gave them an edge over native-born Americans who were firmly rooted in places with faltering economies. Immigrants are good at doing something difficult: leaving behind relatives, friends and the familiarity of home in search of prosperity. The economists found that native-born Americans who do what immigrants do — move toward opportunity — have children who are just as upwardly mobile as the children of immigrants. 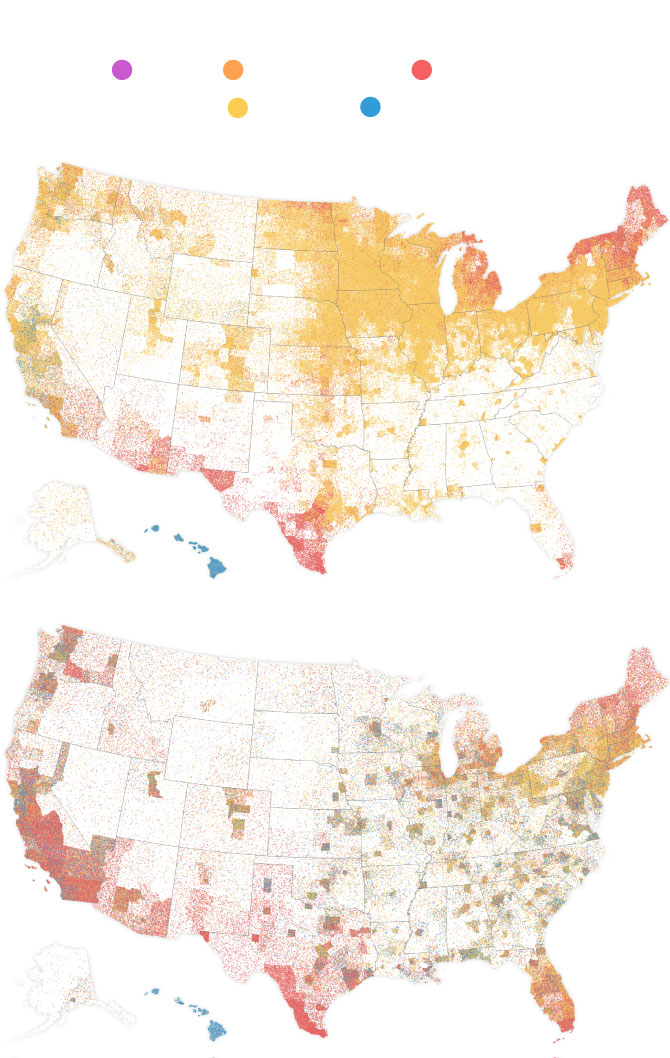 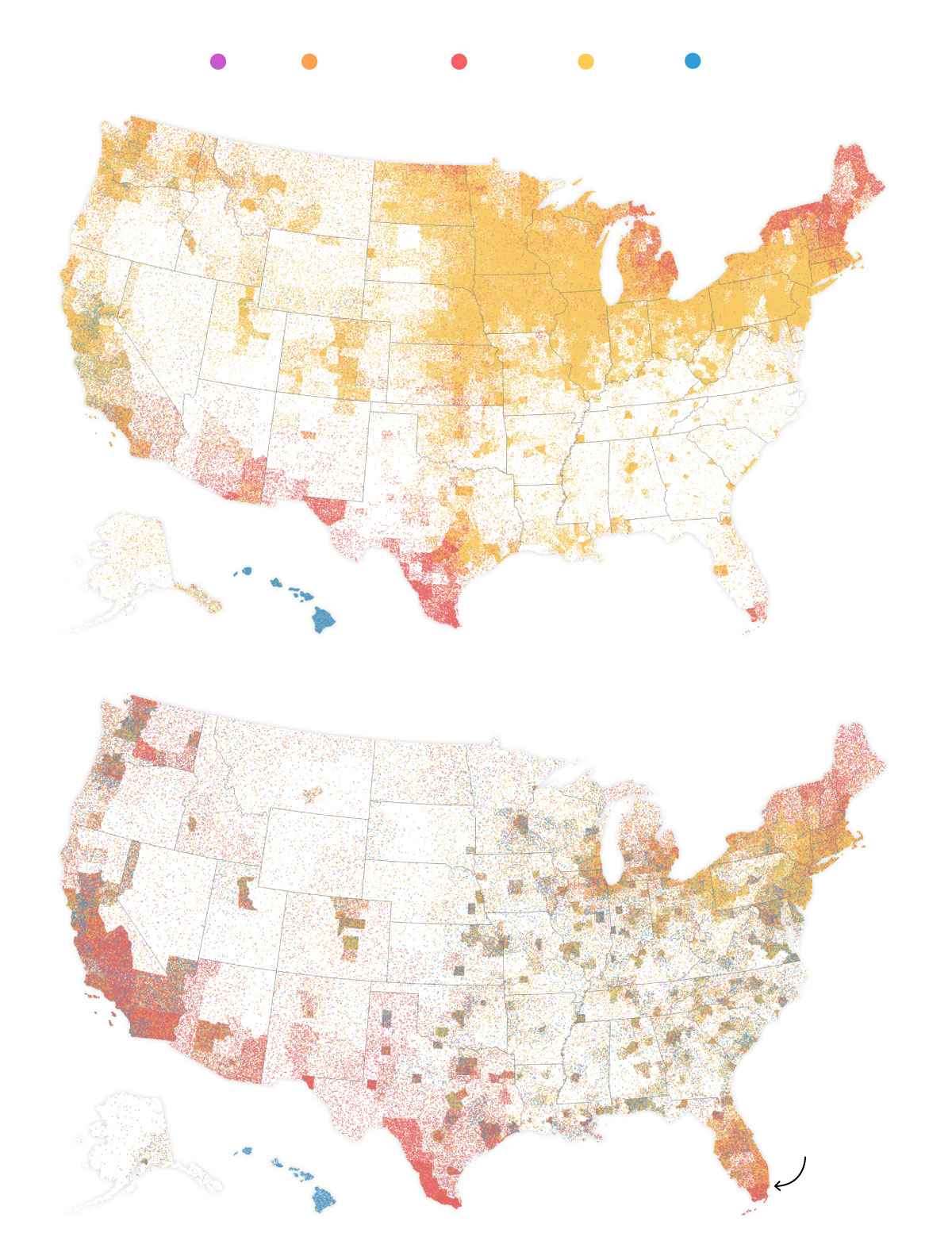 European immigrants flocked to factory jobs in the Midwest …

… and largely avoided the faltering economy of the rural South during the Jim Crow era.

About 125,000 Cubans landed in Florida during 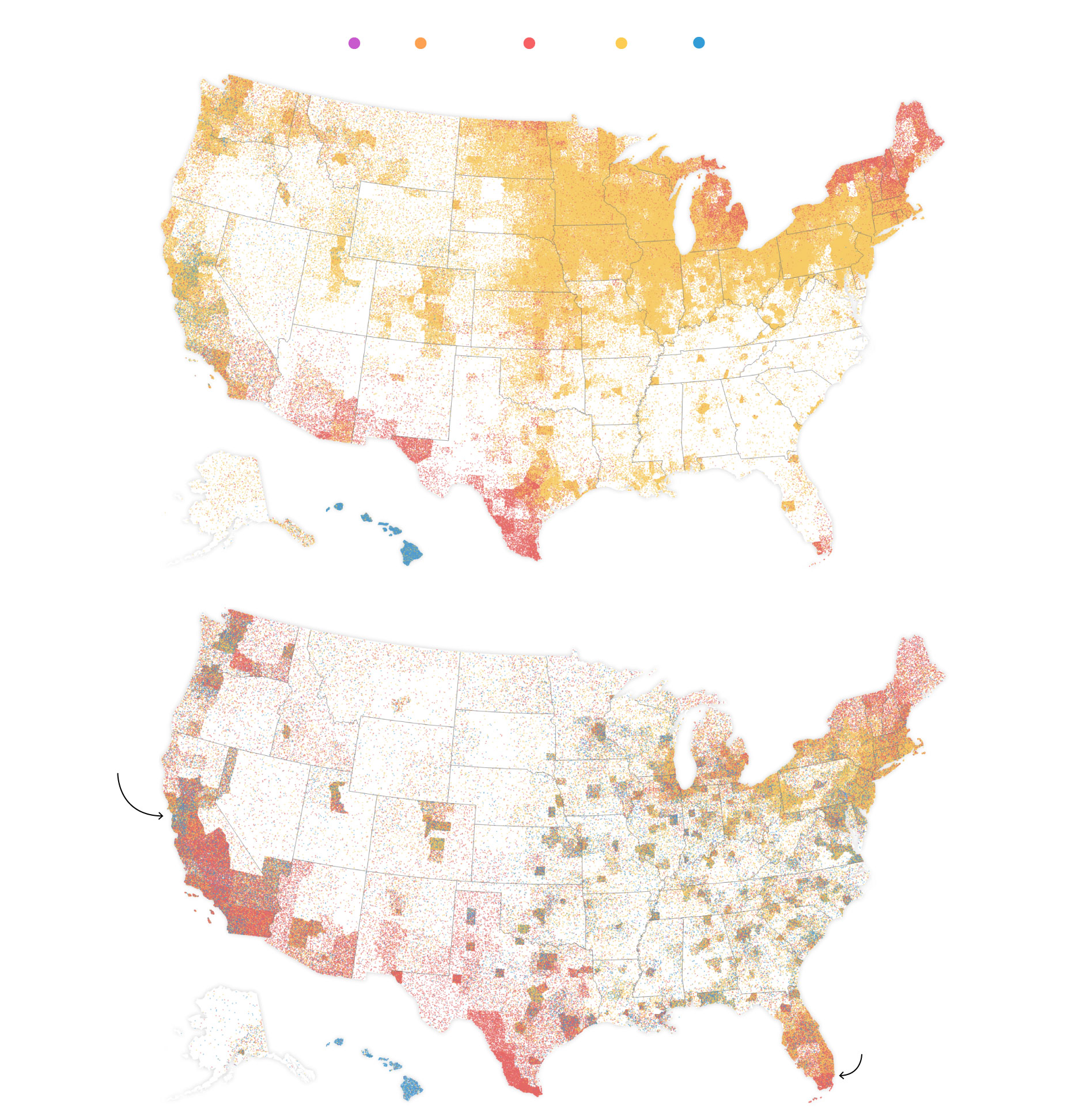 flocked to factory jobs in

to the West Coast.

… and largely avoided the faltering economy of the rural South during the Jim Crow era.

were already in the

United States in the

landed in Florida during the Mariel boatlift.

Looking at maps of where immigrants have settled at different points in time, it’s clear that those regions were also areas of productivity and economic growth. In 1910, European immigrants went to work in the factories of the Midwest and New England. In 1980, immigrants from elsewhere in the Americas filled jobs in rapidly growing parts of Texas, New Mexico, Arizona, California and Florida.


If immigrants are so upwardly mobile, why doesn’t it seem that way? One reason is that there are more newcomers than there have been in decades and most haven’t had time yet to get ahead. The share of foreign-born people in the United States is back to the levels of the first two decades of the 20th century.

Another reason is that most immigrants are arriving well below native-born Americans socioeconomically. They are more likely, Mr. Abramitzky and Ms. Boustan found, than immigrants of the past to come from countries that are significantly poorer than the United States, including El Salvador, India and Vietnam. But it’s those immigrants who start at the bottom who ascend the most. In contrast, affluent, educated immigrants tend to be the least upwardly mobile, simply because they’re already at or near the top.


The research of Mr. Abramitzky and Ms. Boustan has made headlines before, but in their new book they broaden and deepen the narrative with excerpts from diaries and oral histories of immigrants. Signe Tornbloom, 18, a daughter of hardscrabble Swedish farmers, immigrated alone in 1916 after receiving a letter that said, more or less: “Well, you’d better come over here. Everything is much better than it is at home.”


The notion that immigrants have become a permanent underclass, isolated from the American mainstream, is popular among immigration restrictionists — as well as among some pro-immigration groups that say immigrants need more help to break out of poverty. The truth is that today’s immigrants are advancing just as swiftly as those of the past. “The American dream,” Mr. Abramitzky said in an interview, “is just as alive now as it was a century ago.”

Surf City Preps for 4th of July Parade and Fireworks