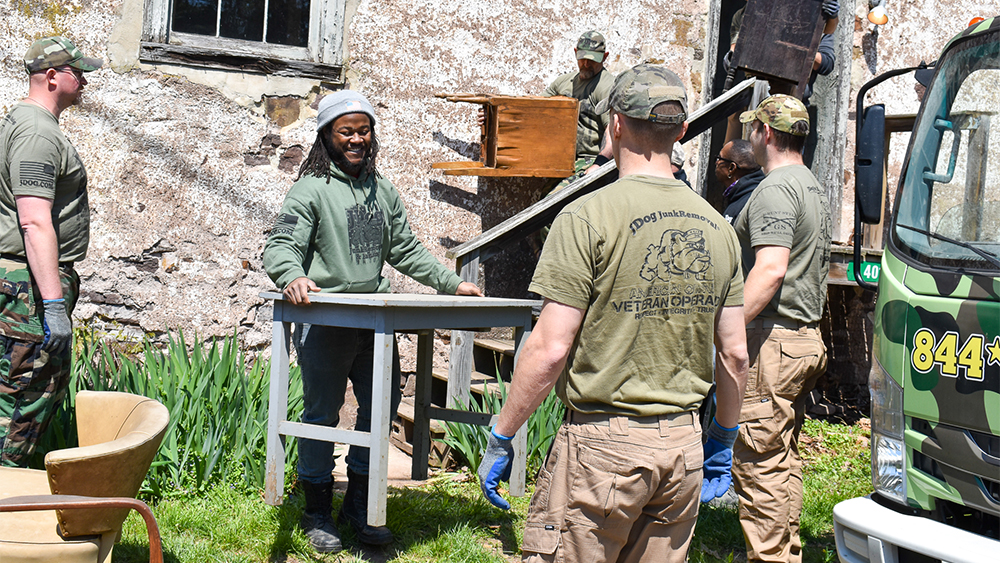 Imagine if “Pawn Stars,” “American Pickers” and “Storage Wars” created a mashup spinoff, but with a higher purpose.

That’s what viewers will find when they tune into “Operation Hidden Treasures,” Discovery Channel’s new reality series that puts the spotlight on America’s veterans, as so few TV shows do.

The half-hour unscripted series follows members of the world’s biggest military veterans’ enterprise, JDog Junk Removal and Hauling, as they turn someone’s trash into someone else’s treasure, all for a good cause.

Milio, who co-executive produced the film “My Big Fat Greek Wedding,” and hails from shows such shows National Geographic’s “Dog Whisperer,” History’s “Founding Fathers” and “Rescue 911” from CBS, has worked on many television projects that have positive impact. But with “Operation Hidden Treasures,” he saw a hole in the industry where very little subject matter is focused.

“This is a feel-good show about finding amazing items and giving them a new home,” Milio says. “But the show also deals openly and honestly with issues like PTSD, homelessness, HIV and other issues faced by veterans and their families.

The series features a nationwide effort by vets from JDog Junk and Removal and Hauling — a franchised operation wholly owned and operated by vets and their families — who utilize their service skills to change lives by recovering and repurposing junk items that have been donated by ordinary people into valuables for veterans in need.

The episodes will feature unique finds including a fishing boat that is dragged from 20 years of underbrush to be cleaned out and donated to a woman, who goes fishing with her son. Another standout moment features a pre-teen donating his old items to less-fortunate children.

“Almost everybody has something in their home or apartment that they are never going to use again — and there’s a 99.9% chance that there’s a person or family out there that would love to have that item,” says Milio, who works alongside his wife, co-executive producer Jeanette B. Milio, on the show that debuted in early October. JDog Media and Alliance Cinema are behind the series.

When Milio first learned about JDog, a mutual friend told him he thought the company would make for a good reality series. “I said, ‘Everybody thinks they are a reality series!’” he cracks. “But once I met Jerry and Tracy Flanagan, who own JDog, and got a sense of what the company was all about … I knew I had to showcase what they were doing.

“We want to show veterans that there are ways to be their own bosses as franchise owners, or that they can work for a veteran-run business that wants to hire veterans whenever possible,” Milio says. “I think we need more shows that shine a light on the positive ways people are trying to help each other.”

Big Tech Seeks Its Next Fortune in the Metaverse

Elon Musk Is Still Bitching and Moaning About Paying Taxes