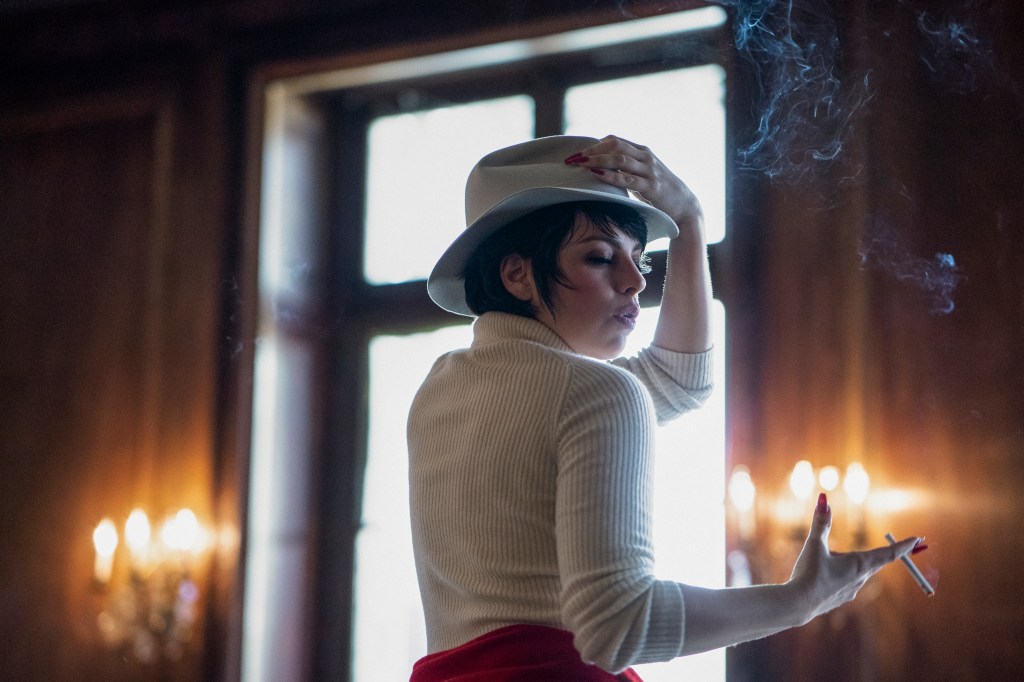 “Getting out of my own head should be the title of my autobiography.”

That’s the first thing Krysta Rodriguez says in a Zoom conversation about her new role as the legendary Liza Minnelli in Netflix’s limited series “Halston.” To be fair, though, this quick quip is in response to a question posed about whether preparing to portray such a well-known figure is as much mental as it is physical.

“When I got the audition for this, I saw ‘Liza Minnelli’ and my heart started pounding and I was like, ‘This is mine’ — and also, ‘I don’t know how to get this. I’m terrified of this,’” Rodriguez says. “I have the email I sent to my agents that says, ‘My heart is pounding, I think I’m scared,’ and they were like, ‘That sounds like a good sign.’ ”

Ultimately, it was. The multihyphenate performer — best known for stage roles in “Spring Awakening” and “A Chorus Line,” as well as television work on NBC’s “Smash” and “Trial & Error,” ABC’s “Quantico” and Netflix’s “Daybreak” — nabbed the role alongside Ewan McGregor as the title character.

While fans of both the eponymous fashion designer and the actor-dancer-singer may know about their public escapades at Studio 54, where they were photographed together many times, their behind-closed-doors bond is something Rodriguez was most excited to explore within the series.

Here, Rodriguez talks with Variety about her research process for the role, her “Liza With a Z” introduction scene and whether working on “Smash” helped prepare her to sing on this show.

Meeting this show’s version of Liza Minnelli through such an iconic song as “Liza With a Z” is bold. Was that actually the first thing you shot for the show? How did you prepare?

My first scene that you see me in was the first thing we shot of mine. I remember meditating on it and being like, “If I get this part…,” like when you wager with God that “if you get me out of this I’ll donate to the church.” So I was saying, “If I get this part, I will do nothing but this part for the next two months. I will live and breathe and sleep Liza.” And then I did get it and every morning was consuming her: reading about her, studying it, walking like her, doing all the things that I could do to get in that mindset. “Liza With a Z” is so well-documented, it was actually such a great thing for me to start with, whereas actually the scene work where I had to think about how she would be in a moment without knowing how she really was was a little more complicated. This was a great entrance for me because I am a performer and I know how to turn it on when it’s time to a do a number. But it was a room full of 100-plus people and my very first thing, so it was nerve-wracking.

What were the discussions like about how much of your “Liza With a Z” performance needed to match what is so easily watched online now?

Dan Minahan, the director and the showrunner, has basically had this show as a dream for 25 years, so it was so easy to just take a warm bath in his direction. He knew more than any of us so he was the right person to bounce things off of. But what’s great about what we do in the show is [our version] of “Liza With a Z” is years earlier than the special. So, what was really fun to do was to try to calibrate where we were in her life in this fictional meeting that they have — what year she would be in, who was she married to, who is she sleeping with, what was she wearing, how is her relationship with her family, how many times has she done this number? We really dug into where she would be if we dropped her into this moment, and we got to play around with her not being perfectly polished with the number. Dan and I would send each other clips of it and we had a really good time talking about doing jokes this way or that way.

Belarus: US draws up sanctions for ‘ongoing abuses’ after plane incident

Did your experience on “Smash” aid in preparation for the musical numbers?

I think my theater background actually prepped me better for both of those projects because of the stamina. You have to be able to perform and perform and perform and perform. The “Bonjour, Paris” number that we do in Versailles was a 14-hour day. You have to know to show up every time it starts like you would on stage, but then you have to know when to conserve when the show is about your arm or the people behind you. So I think being on television with “Smash” taught me to conserve smartly and theater taught me how to show up at any moment when it’s time to roll and for a long amount of time.

How did stepping into Liza’s shoes change the way you thought of her as a woman or as a performer?

I’m in a musical theater world, she is our queen. But I don’t know that I ever felt like a kindred connection with her before. But the more I was auditioning and the more we were working on the pieces, I just really felt [one]. There’s a physical resemblance, although I’d never really noticed it until we started working on it as much, but it is pretty uncanny sometimes. And there’s some alignment in our upbringings and the fact that we both do theater and all of that. But where I really felt connected with her was this vulnerability that she had. She was actually on the forefront of something that I think we’re all still trying to find now, which is this ability to be open and vulnerable and completely raw with an audience with almost zero self-criticism while it’s happening.

How specific did you want to be about watching footage of her performances or interviews to mimic some of her movements or mannerisms?

What makes her special — what makes audiences enraptured by her — is the fact that she leaves it all out there and opens it up from the rib cage and she just lets everybody inside for a few moments. I had to not be so worried about where her hands were placed and where her dialect would come from or whatever in order for me to be able to do what makes her magical, which is that vulnerability and, in combination, the strength with it. All I had to do was open myself up as much as I possibly could and be vulnerable, too.

So what did you rely on for research, outside of the scripts?

The things that really informed a lot about what I was doing were the quotes other people said about her. I would listen to what her ex-husbands would say or her friends. She talks about how people ask her why she doesn’t sing her mother’s songs, and she says, “Because my mother’s singing about victims and I sing about survivors.” I think that was the key: The key to Liza was that was that she survived, and she still survives, and she’s the only one. But I had to be Liza Minnelli at her best, which is something that is hard to do, or anyone would do it. So you have to do the work and then forget about it when you’re on set.

There is a moment where she faints at Studio 54, which is not her at her best. And then it’s alluded to that she’s going to rehab. Did you shoot any scenes of her there, or just generally in a less-than-perfect state that ended up on the cutting room floor?

No, it was just that scene of her fainting. And there was actually some discussion about if Studio 54 would even make it into the series. There’s so much of Halston’s life that has to be covered that it’s all in this frenetic, frenzied pitch, and her downfall [marks] the unraveling of the era.

When creating the relationship between Liza and Halston, how much did you want to play with moments of performance, even when she’s not technically on a stage?

I think what is quintessential about Halston and Liza together is that they are characters themselves. They’ve had complicated childhoods, and I think both of them have an affectation — they know when to put on what they need to put on to get through. There was all of this lead-up to doing [the show] and then we were shut down because of COVID. So, there was all of this stuff I had been storing in me that then had to be released because we didn’t know when we were coming back. When we did come back, the first thing that we shot was Halston and I on the couch watching my “Liza With a Z” special and him asking her to perform at Versailles. And that is the first moment where the two of us arrived on the show fully formed as what I would call the characters of Liza and Halston. Because when they meet, they’re floating in this state of trying to make a name for themselves and then they form who they will become in the public together. And so, what was great was to be able to film that moment [after] we’d been away for so long, and now we stepped into these truly perfect versions of the two of them. And then we got to face the world together as that. I think that bonded Ewan and I, and it bonded Liza and Halston in the story. I think it’s really important that the two of them created these characters together, but when they’re home and when they’re in their fancy pajamas and eating the chicken that he prepared, they are gabby friends who will do anything for each other and die for each other.