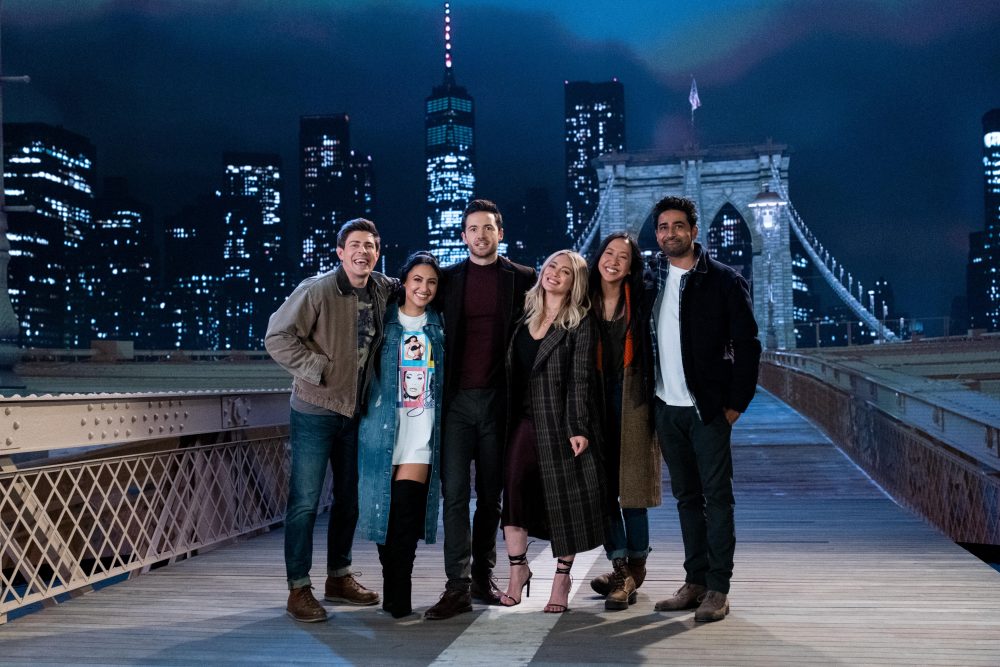 Hulu has released a first look photo featuring the cast of “How I Met Your Father” that also showcases Industrial Light and Magic’s new virtual production stage, the Infinity, on Disney’s Burbank lot.

The sequel series to the hit CBS sitcom “How I Met Your Mother” stars Sophie (Hilary Duff) who is telling her son the story of how she met his father:  story that catapults us back to the year 2021 where Sophie and her close-knit group of friends are in the midst of figuring out who they are, what they want out of life, and how to fall in love in the age of dating apps and limitless options.

“How I Met Your Father” showrunners Isaac Aptaker and Elizabeth Berger had conceived a pivotal sequence for an episode of the show, which is set in New York City, in which their lead character walks the Brooklyn Bridge with her friends. Rather than flying Duff and her castmates across the country and braving the logistical obstacles of the elements, location shooting and permits, ambient noise and other complications, series director and executive producer Pamela Fryman was able to shoot her stars on the virtual stage, capturing a render of them walking the iconic location which will Disney hopes will look authentic to viewers.

“I was able to spend the day in Burbank shooting a scene on the Brooklyn Bridge,” Fryman said of the advantages of working on The Infinity stage. “The logistics and price tag of shooting on location (even when there’s not a pandemic) would have made this scene impossible — but thanks to this new technology the scene is in the can.”

ILM has already been at the forefront of virtual production with its StageCraft technology as seen in recent Disney productions such as the live-action “The Lion King” and Disney Plus drama “The Mandalorian,” produced by Lucasfilm.

The Infinity on Disney Stage 1 is situated on the same stage where sequences of Disney’s 1940 animation masterpiece “Fantasia” were filmed, the new facility is composed of 700 state-of-the-art LED panels. When combined, they create a 1,600 square foot LED canvas- including doors- or approximately 16,000 cubic feet on the main Volume, plus 800 square feet of doors.

Fashion Festivities! Get Your Wardrobe Holiday-Ready With These 5 Items

“This stage will serve as an extraordinary resource for creatives both inside and outside the Walt Disney Company, bringing this groundbreaking technology- often used in feature films and effects-laden series- to episodic television production,”  Ziffren and Grimwade said in a statement. “It’s a huge step forward for our television operations and we’re excited to have this tremendous resource for our creative partners as well as other industry producers.”

“We are excited to show how virtual production can help a wide range of productions from simple process shots to complex in-camera digital environments,” said Chris Bannister, executive producer of ILM’s StageCraft.

In addition to its future use for the hundreds of Walt Disney Company television productions each year, the Infinity on Stage 1 is also available for rental to other studios and production entities. The facility will also be used as a training platform for production craftspeople to learn more about the possibilities unleashed by virtual production technology.

“How I Met Your Father” is expected to bow next year. In addition to Duff the cast includes Kim Cattrall, Chris Lowell, Tom Ainsley, Tien Tran, Francia Raisa and Suraj Sharma. “How I Met Your Mother,” also produced by 20th Television, had a long and successful run on CBS from 2005 to 2014.

I Graduated From College Free of Student Debt. I’m Not a Model for Anyone.

“He Could and Likely Will Try to Do It Again”: Jake Tapper Is Taking...