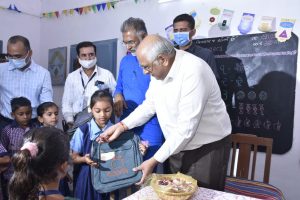 In Gujarat, the Chief Minister Bhupendra Patel has launched the 17th ‘Shala Praveshotsav’, the drive to enrol students in primary schools in the state. The three-day enrollment drive begins from Memadpur primary school in Vadgam taluka of Banaskantha district. Chief Minister Patel said that the dropout rate of students’ reduced drastically following the mass enrolment drives of the children. He said that the drop out rate has been reduced to just 3.07 percent from 37.22 percent in 2002.

According to official sources, the state officials including IAS and IPS officers and Members of Parliament and Members of Legislative Assembly will visit different schools of the state and enrol children in Class I.

We’re Back and It’s Hot

SMUGGLER’S PARADISE: How American Teenagers Are Being Lured Into Human Trafficking On Social Media