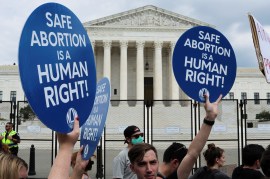 “We hold that Roe and Casey must be overruled. The Constitution makes no reference to abortion, and no such right is implicitly protected.” With those chilling words an illegitimately obtained Supreme Court majority tore up the lives of Americans & the Constitution in the Dobbs opinion authored by Justice Samuel Alito. The votes for this opinion were only available because Merrick Garland was wrongly blockaded at the end of the Obama administration and Amy Coney Barrett hypocritically jammed through at the end of the Trump one.

Indeed, with this decision, we must ask if the Trump administration has really ended or simply migrated down Pennsylvania Avenue and taken up occupancy in the third branch.

The Alito opinion comes in the midst of congressional hearings exposing the sickness of Trump’s style of governance—Trumpery, as we term it in a new book. The Dobbs opinion also exemplifies Trumpery, and its features provide a useful framework for understanding just how bad the opinion is. The Court should be known from here on out as the Trump Court.

Perhaps the single most defining characteristic of Trumpery is its disdain for the rule of law. The Alito opinion in the Dobbs case has that in spades. A central tenet of Supreme Court jurisprudence is stare decisis, the idea that once the Supreme Court has ruled on something, it is settled law and is entitled to permanence, even if later courts may disagree with it. That is particularly true where you have a decades long established precedent like Roe.

By upending one of the core legal principles governing the Supreme Court’s functioning, the Alito opinion undermines the rule of law—and the court’s legitimacy. It is akin to Trump’s incessant assault on the laws and norms of the presidency that we have heard so much and so powerfully about in the Jan. 6 hearings. As we are being painfully reminded in the Jan. 6 hearings, that assault over time undermined and weakened the executive branch and Americans’ faith in it. Alito and the five justices who joined with him are sending the Supreme Court down that same slippery slope.

And they are transmitting a dangerous message: If Roe can be tossed out, then any Supreme Court precedent is in jeopardy. There goes stare decisis. In his concurrence Justice Clarence Thomas says the quiet part out loud: “in future cases, we should reconsider all of this Court’s substantive due process precedents, including Griswold, Lawrence, and Obergefell.” Americans’ right to contraception, to make consensual choices in the bedroom and to same-sex marriage are all up for grabs. How long before states are also free to re-criminalize premarital sex and interracial relationships?

This madness is driven by the second core tenet of Trumpery: elevation of personal interests over public policy ones. Alito is himself reportedly opposed to abortion in his personal life, as are some of the other members of the majority. With this decision, they have allowed their personal agendas to seep into their abandonment of stare decisis and their official policymaking.

Sound familiar? Not just Trump but many in his administration used and abused government as a tool for their personal ends. Judges are supposed to adjudicate legal issues on the merits, independent of their personal ideologies. Alito and those joining the opinion have done the exact opposite here.

The third trait of Trumpery is also glaringly evident in the opinion: shamelessness. Alito feels no embarrassment at his naked attack on stare decisis, his pursuit of his personal agenda, or his dishonesty. Nor do he and his Dobbs colleagues see the need for baby steps, save for Roberts, who said he would have proceeded more slowly but who still joined the judgment. The majority opinions bold in declaring Roe and Casey dead. Like Trump’s openly professed desire to “overturn” the election, Alito and his cronies overthrow of a half-century of precedent is unashamed and even brazen.

Fourth, Trumpery divides our society. Like the former president’s policies on immigration and building his wall, or his declaration that the white supremacist rioters in Charlottesville, Virginia, included “fine people,” Dobbs is a burning torch thrown into the tinderbox of our politics and society. Once the court proceeded with great caution to avoid popular turmoil. Not here. The result will foment widespread unrest.

Bringing to mind Melania Trump’s infamous slogan, Alito and crew’s attitude is “I really don’t care, do you?” The opinion states, “We cannot allow our decisions to be affected by any extraneous influences such as concern about the public’s reaction to our work.” That is just wrong. Avoiding the kind of political turmoil and escalation we are now facing is part of why we have stare decisis—judges should care about upsetting long-settled expectations and the societal ruptures that causes. Disregard for (and even intentionally exacerbating) social divisions was a specialty of the former president, who did everything possible to gratify his base. Tragically, this opinion smacks of a similar approach, consequences be damned.

That will do great harm not just to the social fabric, but to our system of government itself. The assault on democracy is the fifth foundational aspect of Trumpery. This decision will decimate the legitimacy of the Supreme Court. It was already on shaky ground, with its current composition owed to two presidents, George W. Bush and Trump, who did not win the popular vote during their initial victorious campaigns to the White House. To make matters worse, the shape of the court was, as we noted above, manipulated by the GOP Senate blockade during President Barack Obama’s last year in office of his pick for the Supreme Court, Merrick Garland, purportedly because it was an election year. Then when a Supreme Court seat became vacant even later in the last months of Trump’s administration, a Republican majority in the Senate abandoned any pretense of consistency to rush through Justice Amy Coney Barrett. This decision will devastate whatever remaining bipartisan legitimacy the court enjoyed had.

The sixth core characteristic of Trumpery is dishonesty, perhaps the single most overriding theme of the Jan. 6 hearings. The Dobbs opinion is rife with disinformation. For example, Alito justifies his reasoning on Roe with the fact that abortion is an “unenumerated right”—among the civil and human rights that are not explicitly mentioned in the Constitution. These rights, Alito contends, should only receive federal protections if they are “deeply rooted” in U.S. history and culture. Abortion is not, according to Alito.

But the truth is the court has many times—including recently—instituted or upheld protections for unenumerated rights that don’t have the long history Alito is describing. That includes protecting interracial and same-sex marriage. To apply this reasoning to other unenumerated rights but not to abortion is contradictory and disingenuous, to say the least. They may be next on the chopping block.

On the factual side, Alito cites fellow Justice Clarence Thomas in saying that abortion amounts to eugenics targeted at Black people. The truth is much more complicated, and ignores that outlawing abortion will disproportionately hurt women of color. To take only one other example of many, Alito also references Justice Amy Coney Barrett’s contention that “safe haven” laws—which protect from penalization parents who give up their child—obviate the need for abortions. But whether those laws lead to better outcomes for mothers is inconclusive, and experts disagree on their efficacy in general.

That brings us to the seventh and final of the seven deadly sins of this opinion and Trumpery alike: disdain for ethics. The Dobbs opinion—and what Justice Thomas chillingly signals it may augur—is cruel to women, to all Americans and to the rule of law itself.

Fortunately, all is not lost. The Supreme Court may have taken away Americans’ right to choice over their bodies, but they have not yet stolen our power to vote. With this deeply unethical screed, Alito and the rest of the Trump Court majority have given many millions of angry Americans a reason to turn out in November. Voters should give us state elected officials who will pass laws to protect choice. And the electorate should send to Washington a Congress that will pass a federal right-to-choice bill—and one that addresses the wrongly manipulated composition of the court by increasing its membership.

Congress has that unquestioned power under the Constitution. It has changed the numbers of justices before. And it should do so again.

CNN law enforcement correspondent questions if man out to kill Justice Kavanaugh over Roe v. Wade was even armed — despite ‘man with weapon’ onscreen headline

An evening of eye candy

Mitt Romney: A Return of Trump Would Render America ‘Incurable’