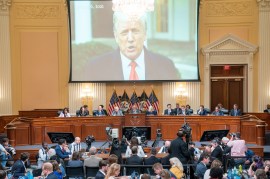 As the January 6 committee gears up for the resumption of its public hearings next week, Americans continue to make sense of the voluminous evidence and witness testimony presented by the panel in June. That presentation toggled between the grand and the granular, depicting the monthslong, coordinated campaign to overturn the results of the 2020 election while filling in the minute details necessary for potential criminal prosecutions. Of the many June revelations indicating what—and who—ultimately catalyzed the violence on January 6, five points stand out.

Donald Trump was intimately involved in the campaign to overturn the election.

The committee’s six hearings established powerful evidence that then-President Trump was a driving force in the push to overturn his election loss. Trump was clearly emotionally invested in the election-reversal campaign—Cassidy Hutchinson’s explosive testimony that he accosted his Secret Service when they refused to drive him to the Capitol on January 6 and in anger threw a plate of food at the wall in the White House demonstrate that. But proving his direct participation in the execution of the scheme is the real task for the committee as it attempts to convince the American people that Trump bears responsibility for the events of January 6, as well as to tee up the outline of a prosecution for federal and state investigators.

Compelling new evidence of Trump’s central role came in the form of testimony that Trump placed or joined calls to Republican state legislators and party officials and pressed them to take steps to flip the election in his favor. Arizona Speaker of the House Rusty Bowers, a Republican, testified that he received multiple post-election calls from Trump and Rudy Giuliani in which the former president urged Bowers to use his stature in the statehouse to decertify Biden’s upset win. Furthermore, recorded testimony from Ronna McDaniel, chairwoman of the Republican National Committee (RNC), implicated Trump’s apparent participation in the fake-electors scheme now receiving enhanced scrutiny from investigators.

The committee also underscored that Trump’s fingerprints are perhaps nowhere more pronounced than in the subplot to weaponize the Department of Justice (DOJ) on behalf of the stolen-election campaign. Top DOJ officials who withstood immense pressure from Trump and his staff detailed just how persistently Trump exhorted the department’s leaders to investigate his far-flung fraud theories. When Acting Attorney General Jeffrey Rosen and his deputies unambiguously told the former president that their investigations had failed to unearth meaningful evidence of fraud, Trump reportedly dropped his pretense and implored the DOJ to simply rubber-stamp his claims and “leave the rest to me and the Republican congressmen.”

Trump was told by close aides and his own appointees that he had lost a free and fair election.

A critical element of arguing that Trump committed crimes in his orchestration of the campaign to overturn the 2020 election is showing that he acted with intent. If prosecutors cannot show that Trump knew he lost the election, and yet continued to take steps towards its reversal, they may face an uphill battle winning a guilty verdict from a jury. Indeed, Trump has already telegraphed his genuine belief that the election was stolen—and that he was merely acting to remedy that injustice—as a potential legal defense.

That explains why the committee hammered away at evidence that Trump’s closest associates repeatedly told him that he had lost the election. Attorney General William Barr testified that he had “three discussions with the president” from late November to early December 2020 in which the attorney general told Trump that the stolen-election claims were “bullshit.” Jason Miller, a senior figure in Trump’s two presidential campaigns, also recounted in recorded testimony that several days after the election, the campaign’s lead data expert, Matt Oczkowski, conveyed to the former president in “pretty blunt terms” that Trump was bound for defeat. Bill Stepien, the manager of the 2020 campaign, described a similar post-election conversation in which Trump was told of his “very, very, very bleak” odds of victory.

The DOJ officials, whose testimony is described above, also unmistakably stated to the former president that no fraud had affected the outcome of the election. The three attorneys presented a similar image of a defeated executive who, even after being told repeatedly that no fraud had surfaced in their investigations, evinced a clear disinterest in progress reports that did not vindicate his stolen-election claims. He merely plowed ahead with the crusade to reverse his loss.

Republican members of Congress were personally involved in the election-reversal plot and sought pardons in the wake of January 6.

Testimony and material evidence presented at the hearings revealed that Republican members of Congress took part in various facets of the scheme to reverse Biden’s election win and sought pardons for their participation. Committee Vice Chairwoman Liz Cheney (R-Wy.) previewed that in the committee’s first hearing when she announced that “multiple other Republican congressmen” appealed to Trump for clemency in the weeks after January 6.

The committee named in its fifth hearing a handful of House Republicans—which included Representatives Matt Gaetz (R-Fl.), Mo Brooks (R-Al.), and Marjorie Taylor-Greene (R-Ga.)—who allegedly implored the White House to issue them preemptive pardons. Trump reportedly considered pardoning those members and all the Republican congresspeople who voted to object to the election results on January 6. Cassidy Hutchins testified that Meadows and Rudy Giuliani also sought pardons for their involvement in the election-reversal scheme.

New evidence about Republican congressional efforts to help overturn the election was not limited to the lower chamber. The committee also spotlighted Sen. Ron Johnson (R-Wis.), presenting text messages sent between aides to Johnson and Vice President Pence in which the Johnson aide conveyed that the Wisconsin senator reportedly wanted to pass to Pence an “alternate slate of electors for MI and WI because [the] archivist [of the National Archives] didn’t receive them.”

Trump and his associates’ fake election claims unleashed a torrent of vicious threats against election officials and their families.

Rhetoric-fueled threats of violence against state election officials and poll workers formed a common thread through multiple of the June hearings. Witness testimony vividly illustrated how the ceaseless stream of false claims spouted from nearly every echelon of the Republican Party turned formerly sleepy elected offices and election-administration positions into lightning rods of scrutiny and abuse.

Many of those attacks targeted Republican officeholders who refused to bow to Trump’s demands. From Al Schmidt, former Republican city commissioner of Philadelphia, to Brad Raffensperger, Georgia secretary of state, Republicans who publicly defended the integrity of the 2020 vote or spurned entreaties by Trump and his associates to meddle with the outcome were tarred as Republicans-in-name-only (RINOs), a shorthand for traitor on the right in the post-2020 political climate. Schmidt noted that the belligerence and frequency of the threats against him and his family escalated after Trump tweeted his name on November 11.

Civil servants who staff the nation’s elections suffered similar treatment. Shaye Moss and her mother, Ruby Freeman, longtime Georgia civil servants who missed “not one election” because of their commitment to democracy, were singled out on social media and in Trump’s January 2 call to Brad Raffensperger. Rampant disinformation about their role in a debunked conspiracy theory prompted a deluge of threats against the mother and daughter pair, forcing them into hiding. Moss testified that the ordeal “turned my [her] life upside down,” and that she was unlikely to resume her service in the state’s election apparatus.

“The system held, but barely.”

The evidence and testimony offered by the committee exhibited how perilously close American democracy came to a constitutional freefall. Many of the witnesses called were the individuals whose dedication to their constitutional oath and the rule of law walked the nation back from that precipice. Their courage emphasizes the critical role integrity plays in self-government—but also serves as an ominous reminder of democracy’s fragility.

Testimony from Republican elected officials who bucked Trump frequently included explanations of why those officeholders so stalwartly refused to abet the overturning of the election. Elected officials, including Brad Raffensperger and Rusty Bowers, and appointed ones, such as Jeffrey Rosen and Richard Donoghue, cited their commitment to the law over the whims of any one man, to principles over power, in their choice of country over party. Committee members frequently thanked these and the other witnesses for their selflessness and bravery in standing up to the most powerful individual on earth.

Their valor is heartening for democracy. But it also exemplifies how a different outcome in a given state race, or a different appointment to a key post in an executive agency like the Department of Justice, could have engendered a radically different outcome to the 2020 election or to that of a future contest. The likelihood of such a crisis in the future is being determined now in primary elections across the country, where election deniers who have pledged to taint future votes with partisanship are running to control governor’s mansions, secretary of state offices, and other essential state positions that dictate the administration and certification of elections.

That is why panel members have noted that the hearings are both an excavation of the past and a warning for the future. In the words of Chairman Bennie Thompson, “The conspiracy to thwart the will of the people is not over.” The committee’s investigation has made great progress towards documenting the totality of the campaign to overturn the election—the before and after of January 6 as well as the events of the day. Its march towards answering those fundamental questions will surely continue, unabated, when hearings resume next week.

Biden’s Furious Debate with Himself Over Ukraine

Congresswoman Proposes Bill to Make It Illegal for Children to Be Exposed to Drag...