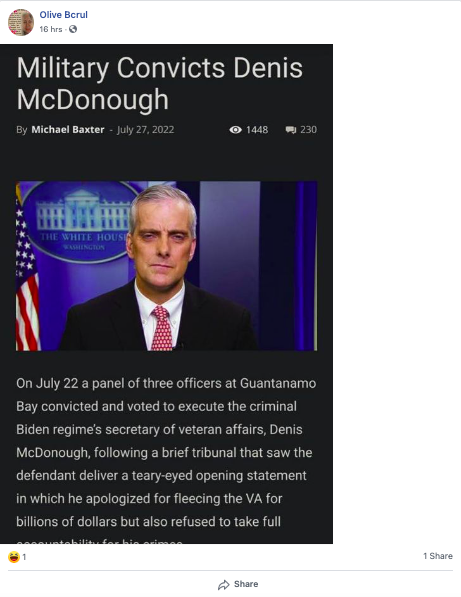 There is no evidence to suggest McDonough has been charged or convicted of any crime. The claim stems from a satirical website.

McDonough was confirmed by the Senate to be the Veteran Affairs secretary in February 2021 after being nominated for the position by President Joe Biden, according to NPR. He previously served as former President Barack Obama’s chief of staff, the outlet reported.

An image shared on Facebook claims he was recently convicted by a U.S. military panel and sentenced to death. The image shows what appears to be a screen grab of a July 27 news article with a headline that reads, “Military Convicts Denis McDonough.” The text of the article goes on to claim he was convicted and sentenced to death on July 22 “following a brief tribunal that saw the defendant deliver a teary-eyed opening statement in which he apologized for fleecing the VA for billions of dollars.”

The claim is baseless. If it were true, credible news outlets would have reported on it, yet none have. There are also no press releases or announcements about McDonough’s alleged conviction and death sentence on either the Department of Defense’s website or the Department of Justice’s website. He is still listed as the secretary on the Veteran Affair’s website.

McDonough was also reportedly in Boise, Idaho July 28 where he gave a press conference, according to the Idaho Capital Sun. This appearance comes nearly a week after he was allegedly sentenced to death on July 22.

An internet search reveals the screen grab included in the post stems from a July 27 article published by the website Real Raw News. The website’s “About Us” page states the site “contains humor, parody, and satire.” (RELATED: No, The Military Did Not Arrest Veterans Affairs Secretary Denis McDonough)

The July 27 Real Raw News post appears to be a continuation of a July 13 article on the site that alleged McDonough had been arrested by the military. Check Your Fact debunked the claim at the time.