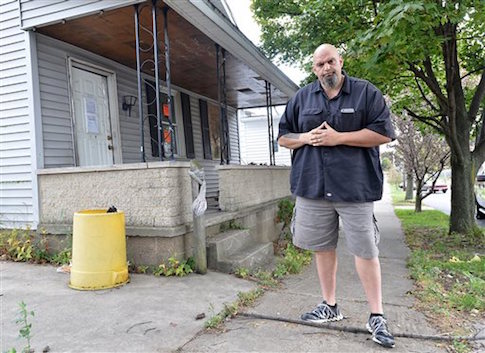 The democratic socialist lieutenant governor of Pennsylvania, who suffered a stroke days before the primary and drew ire on the campaign trail for pulling a gun on an unarmed black man, cruised to victory in Tuesday’s Democratic Senate primary.

Sweatshirt enthusiast “Big John” Fetterman handily defeated moderate Rep. Conor Lamb (D., Pa.), the Associated Press projected. Fetterman will square off in November against either Mehmet Oz or David McCormick, the two leading Republican candidates, in one of the most closely-watched Senate races in the country.

The Republican race was too close to call as of Tuesday night, though McCormick maintained a slight lead over the celebrity doctor. The race appears to be headed for a recount, which in Pennsylvania is triggered when the margin of victory is less than 0.5 percent.

Fetterman’s victory comes days after he suffered a stroke caused by a blood clot in his heart. While the health scare did not derail Fetterman in his primary bid, it remains to be seen if it will be a liability in November. Fetterman asserted over the weekend he would return to the campaign trail “soon,” but he underwent surgery for a pacemaker on Tuesday.

Fetterman was widely seen as a riskier pick than Lamb in terms of electability in the general election. He has supported left-wing Sen. Bernie Sanders (I., Vt.) and criticized moderate Democratic Sen. Joe Manchin (D., W.Va.). He has also been dogged by a 2013 incident in which he pulled a shotgun on an unarmed black jogger. Fetterman has defended his actions, and refused to apologize to the man he held at gunpoint.

President Joe Biden touted Fetterman moments after his primary win, saying the Democrat would be “a big step forward for Pennsylvania’s working people.” No mention was made of the stroke or the racially-tinged shotgun incident.

Democrats see the Pennsylvania race as one of the few opportunities to flip a GOP-held seat in November. The winner will replace outgoing Republican Sen. Pat Toomey. Democratic incumbents face tough races in Democratic seats in Georgia, Arizona and Nevada.

AOC Blasts Senate Democrats after Uvalde Shooting: ‘They Are Complicit in the Violence’

Should You Use –s (or –es) for a Present-Tense Verb?