Europe is staring down the barrel of a destabilizing energy crisis. The Continent’s efforts to thread an extremely fine needle—opposing Russia’s war of choice in Ukraine and refusing to fund it while preserving modern living standards—are failing. European Commission President Ursula von der Leyen warned this week that further reductions in Russian exports could fuel a winter of discontent in Europe, limiting the public’s tolerance for the pro-Ukrainian mission or even destabilizing governments. The situation is grim.

Of course, Europe’s energy woes are of its own making. The Continent devoted its energies to developing a green economy, but progress toward that objective was illusory. Russian fossil fuels grubstaked this project, and the Kremlin maintains a veto over it. And yet, so much of what Europe committed itself to was essentially a paradigm. It simply deemed various aspects of the energy mix environmentally unsound, even if that designation was perfectly debatable. So, what has Europe done in response to its travails? It has rechristened formerly dangerous and dirty fuels “green.”

A European Parliament meeting this week produced a vote in favor of labeling natural gas and nuclear power “green” so as to comport with European Union environmental standards, which opens producers up to receive state subsidies and secure low-interest loans. Environmental activists are in a twist over what they call “greenwashing,” and they’re not wrong. The E.U. is, indeed, engaged in hypocrisy. It’s just the sort of hypocrisy that it had previously engaged in to appease environmental activists. Now, however, European parliamentarians must worry about appeasing everyone else.

This act of prestidigitation, the New York Times forecasts, might be a sign of things to come beyond Europe’s borders. Climate activists mourn the maneuver’s potential to convince other developed and developing nations to slow their transition from reliable sources of power generation to less reliable renewables like wind and solar. If they’re right, it’s not just because fossil fuels and nuclear fission work when you need them to, but because designating natural gas and steam power environmentally unsound made little sense.

Natural gas has long been described as a “bridge fuel,” because it has the potential to reduce dependence on or displace entirely conventional fossil fuels that produce far more greenhouse gas emissions. This one-time waste product that was routinely burned off has become a staple of the global energy diet as a result of new extraction technologies. The environmental results of this revolution are measurable. “Since 2010, coal-to-gas switching has saved around 500 million tons of CO2,” the International Energy Agency confirms, “an effect equivalent to putting an extra 200 million EVs running on zero-carbon electricity on the road over the same period.”

The fact that natural gas produces fewer emissions and can therefore serve as a “bridge” to a greener future frustrates green activists to no end. We might attribute this hostility to zeal for the cause of environmental preservation if they weren’t just as gung-ho in their efforts to anathematize turbine-generated power produced by steam heat resulting from a controlled fission reaction. The activist class’s failure to make prudent and empirical distinctions between these two energy sources allowed the E.U. to lump them together—first, as unclean fuels and, now, as sources of “green” energy.

The Times indicates that this development was promoted by the stand European nations have taken against Russian aggression, which is partly true. But proposals along these lines circulated long before Russian forces poured over the Ukrainian border. In early January, for instance, an effort to deem natural gas and nuclear energy “transitional” green-energy sources for the purpose of generating investment in them gained significant traction. The plan stalled due to opposition from some anti-nuclear member states—Germany, most notably—and green-energy activists. If such a plan were to go into effect, Dutch lawmaker Bas Eickhout observed, “the entire climate leadership of the European Union [would be] down the drain.”

Well, bon voyage, European Union climate leadership. The discovery that we can simply deem transition fuels “green” for the sake of convenience exposes the political, not scientific, nature of this project, to say nothing of its impracticality. The fragile construct that allowed the Continent to pretend it wasn’t dependent on fossil fuels melted away upon first contact with the Hobbesian reality of geopolitics. If only Europe had the luxury of deeming the Russian menace out of existence. Unfortunately, reality doesn’t work that way. 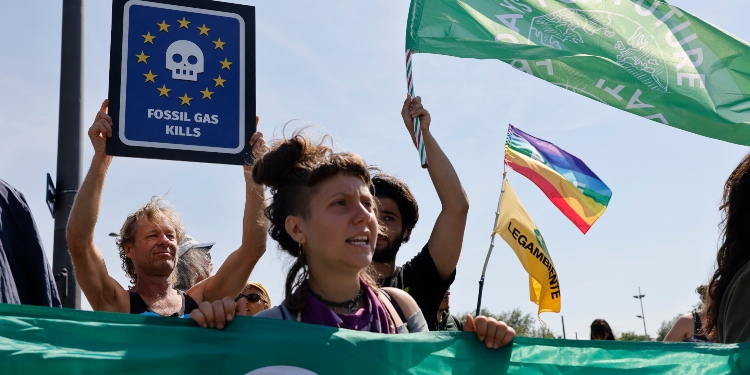 Will the Gun Deal Go Through? Will the Jan. 6 Hearings Break Through?

Is time on Ukraine’s side?

The GOP Can Still Blow It