The percentage of Americans who hold Trump either “solely” or “mainly” responsible for the January 6 Capitol protest has declined over the past year. In January 2021, right after the event, slightly more than a majority, 52 percent, considered Trump either “solely” or “mainly” responsible. However, that figure has declined, as 45 percent now feel the same way, reflecting a seven-point shift, slipping those who hold the former president responsible under the majority threshold.

Most, 55 percent, now say Trump is either “not really responsible” or “only somewhat responsible”:

A final set of numbers from our latest NBC News poll: The percentage of Americans who hold Donald Trump responsible for Jan. 6 has declined since early 2021 pic.twitter.com/GntgtaDWxC

The full survey was taken May 5-7 and 9-10, 2022, among 1,000 adults and has a +/- 3.10 margin of error. It comes days ahead of the January 6 Committee’s primetime hearing — Thursday, June 9 at 8:00 p.m. Eastern — where Democrats and RINOs are seemingly hoping to distract from the country’s economic woes and the Biden administration’s inability to handle them. However, Republicans are ready to respond.

“[Democrats] are doubling down looking for any desperate attempt to try to change the narrative. But look, the American people are smart. They see through this, they want a Congress that’s focused on the issues that matter to them,” House Republican Conference chairwoman Elise Stefanik (R-NY) told Breitbart News Saturday, making it clear that the GOP has a counterprogramming strategy ready to go.

“We’re working very closely with President Trump and his team with Leader Kevin McCarthy, with Jim Jordan, and really all of the House Republicans will be pushing back in a rapid response fashion,” Stefanik said. 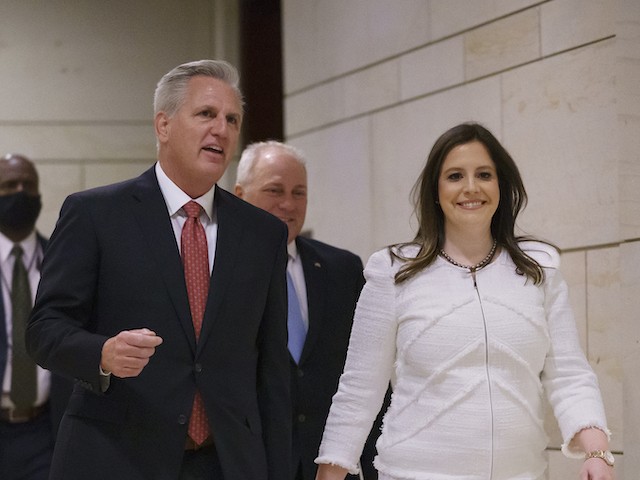 “You will see us all over the airwaves. We will be setting the record straight. We will be telling the truth to the American people, sharing the facts and also really pointing out how unprecedented and unconstitutional and illegitimate this committee is,” she continued, predicting the event to be both a “circus” and “political witch hunt.” She also stressed that the committee has failed to adequately address the main issue at hand of ensuring adequate security at the Capitol — a move that further shows their hand.

“They have shred Congress as an institution, and they are invading on the privacy and really the speech and debate rights of all these elected members of Congress. And they’re targeting everyday citizens, young staffers who worked on the Trump campaign,” she said, guaranteeing that Republicans will “be out there leading every single day,” combatting the misinformation and focusing on issues that matter to the American people.

2000 Mules, hundreds of thousands of phony ballots, and a stolen election