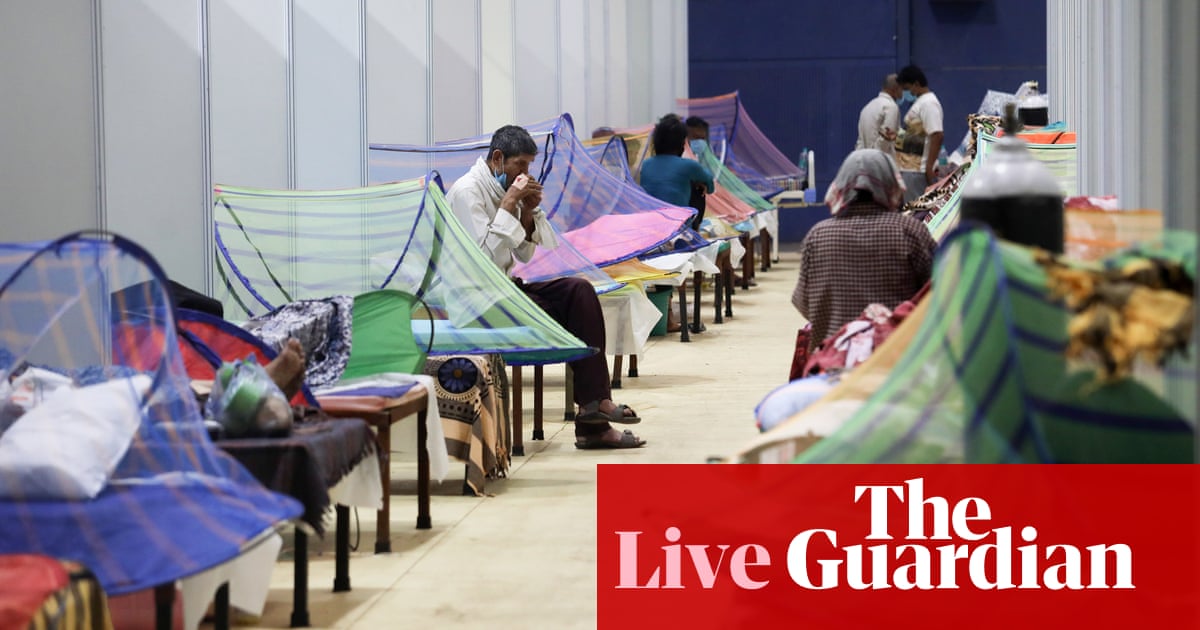 The vast majority of Australia’s 38-strong Indian Premier League contingent has departed for the Maldives, beginning their long and indirect journey home from the aborted Twenty20 tournament.

Cricket Australia and the Australian Cricketers’ Association confirmed on Thursday night that players, coaches, officials and commentators were en route from India to the Maldives.

But Mike Hussey, who is an assistant coach at Chennai Super Kings, was unable to travel with the group as he continues to serve a 10-day isolation period in a Delhi hotel after testing positive for Covid-19.

The length of the Australian contingent’s stopover in the Maldives, where Australian commentator Michael Slater fled to earlier this week, may be determined during a meeting of Australia’s national cabinet on Friday.

The worst-case scenario for Pat Cummins and compatriots would be an extension of the ban on travellers from India, meaning they would need to spend a fortnight in the Maldives then a further two weeks in Australia’s hotel quarantine system.

My colleague Kevin Rawlinson has just launched our UK live blog. With local and national elections, and the prospect of gunboats in the channel in the Brexit fish dispute, he’s likely to have his focus away from Covid, so I’ll be continuing to carry domestic UK Covid lines on this blog alongside the latest global news. You can join Kevin over here…

Health experts “haven’t seen any hint” at the moment of a Covid variant that can fully evade the effectiveness of vaccines, a leading scientist has said on Times Radio in the UK this morning.

Sharon Peacock, head of the Covid-19 Genomics UK Consortium (COG-UK) and professor of public health and microbiology at the University of Cambridge, said it could be the case that coronavirus mutates to become less infectious, though she warned it could take years for it to become like the common cold.

Asked whether a variant will emerge somewhere across the globe that is resistant to current vaccines, she said: “We haven’t seen anything like that to date, and the question you’re asking is the million dollar question in many ways, everybody wants to know what’s the likelihood and when is it likely to occur, if at all.”

“What we don’t know is if it is likely to occur. We know that as mutations accumulate in the virus, it can actually make it more fit in terms of avoiding our immune system, but the more mutations it accumulates, it could actually lead to a virus that is less infectious. So there’s a trade-off for the virus in terms of how many mutations it can tolerate.

Jane Kirby, PA’s health editor, notes she said: “Now, some people have predicted that a virus could emerge that is pretty resistant to vaccines, but we haven’t seen any hint of that at the moment. And the key thing is to get on and vaccinate the world so that we can clamp down. If we can reduce disease rates, then we reduce the risk of variants arising in the first place.”

Prof Peacock suggested richer nations should be doing all they can to help vaccinate people in poorer countries.

She said: “We in wealthy countries should be thinking about people who are less fortunate than ourselves,” and added: “We should be vaccinating the world on a moral standpoint, but also vaccinating the world to try and reduce the rate of infection, so that we protect people from an untimely death, but also reduce the risk of variants emerging in the first place, because ultimately in the long-term, that is one of the major threats to us controlling this pandemic.”

Asked whether Covid will become like annual seasonal flu, she said: “The idea that the virus will become like a common cold and nobody will notice it by next spring is far too optimistic. And so it could take one or two generations before we see a virus that starts to, what we say attenuate, which means it causes less severe disease, and so, I think, what we have to do is tackle the problem that’s in front of us at the moment and not put too much store in the fact that the virus is going to evolve into something that’s really rather harmless.

Russia had already sent 15,000 doses of the vaccine to the former Soviet republic last month, Lavrov was quoted as saying at a meeting with his Armenian counterpart. Armenia’s population is fewer than 3 million people.

The NZ Covid response minister, Chris Hipkins, told reporters the suspension would initially last 48 hours, while the source of infection in the two Sydney cases was investigated.

Hipkins said the pause would be “under constant review”, and if more information came to light that prompted officials to reopen sooner or to extend the pause, then they would do so.

At this stage, it applies only to New South Wales, not all of Australia, and will not affect those flying from New Zealand to NSW – only those coming in the opposite direction.

Hipkins said the government was aware it would cause disruption for travellers, but was erring on the side of caution. “We’ve weighed this up very carefully,” he said. “I’m confident we’ll know more in the next 24-48 hours,” he said.

A man in Sydney tested positive for the virus on Wednesday. On Thursday, Australian health officials confirmed that his wife had also tested positive.

Genomic testing has linked those cases to a likely case at the border – but officials have not yet been able to find a clear chain of transmission. That has raised concerns that there could be a “missing link” case between the border and the community cases, which has not yet been identified.

Pinarayi Vijayan, the chief minister of Kerala, has announced that the Indian state will go into a lockdown from 8 May for a week.

The southern state has a population of 35 million people.

AFP note that West Bengal has also announced tighter curbs, including a suspension of local trains. Weddings are still allowed, however, with a maximum of 50 people.

A little more on that idea of a patent waiver on Covid-19 vaccines here from Reuters. The European Union has said it is willing to discuss the proposal, now backed by the United States.

European Commission president Ursula von der Leyen said today: “The EU is also ready to discuss any proposals that addresses the crisis in an effective and pragmatic manner. That’s why we are ready to discuss how the US proposal for a waiver on intellectual property protections for Covid-19 vaccines could help achieve that objective.”

She was speaking to the European University Institute in Florence. In the video address, she also said that, “In the short run, however, we call upon all vaccine-producing countries to allow exports.”

The ban prevents Australians who have been in India in the previous 14 days from returning to Australia, with threats of fines and jail time if they return. The government says it was enacted in response to the high number of cases of Covid-19 in India but since it was announced, Morrison has been in damage control against accusations the policy is racist.

On Tuesday, the prime minister launched three sponsored videos on Facebook, including subtitles in Hindi and Punjabi, where he talks directly to the camera about the ban. In the nearly nine-minute-long video, Morrison notes the Indian community in Australia is a “generous and kind community” going through a difficult time.

“I know this is a time of great pain and great fear, as many families in Australia have lost ones in India,” he says in the video. “You know we are witnessing in India an unfolding humanitarian catastrophe.”

But he explained the decision to ban returning Australians from India on the basis of medical advice. He said the “temporary” pause would be reconsidered on 15 May, and reviewed every day before then.

The online advertising push comes as immigration minister Alex Hawke holds a series of roundtable meetings with Indian community leaders in Australia to explain the policy and hear their concerns. He held his sixth meeting on Thursday.

Overnight the US declared its support for a patent waiver on Covid-19 vaccines to boost their production and distribution around the world.

“This is a global health crisis,” Katherine Tai, the US trade representative, said in a written statement. “The extraordinary circumstances of the Covid-19 pandemic call for extraordinary measures.

“The administration strongly believes in intellectual property protections, but in service of ending this pandemic, supports the waiver of those protections for Covid-19 vaccines. We will actively participate in text-based negotiations at the WTO needed to make that happen.”

Reuters report that in a response this morning, the GAVI vaccine alliance has welcomed Biden’s support, and urged Washington to help manufacturers to also transfer know-how to boost global production urgently.

“We recognise also the significance of the (Biden) administration’s commitment to work towards increasing raw material production, which will have an immediate impact on alleviating current global supply constraints,” the Geneva-based group that co-leads the global Covax dose-sharing facility told Reuters in a statement.

The waiver will not take place immediately as it has to be approved by consensus at the World Trade Organization (WTO), but the decision of the Biden administration to throw its weight behind a waiver will have a strong influence on the outcome of that decision.

US declares support for patent waiver on Covid-19 vaccines

The chair of the National Long Covid Taskforce, Dr Kiren Collison, has told Sky News that NHS England clinics for people suffering from the condition may be needed longer than first thought. She said:

We recognise this is a condition where the symptoms can be quite prolonged and we’ve already seen that from the patients who got Long COVID a year ago, some people are still suffering, so there is that sort of time frame to bear in mind. We suspect it may need to go on much longer than that.

Dan Whitehead writes for Sky that NHS England has spent £34m on opening 83 clinics, but did not have figures available on how many people are using the clinics. Sky News say they have obtained the numbers from five of the 83 services, which show that by early March more than 2,200 patients had been treated.

They spoke to Donna Taylor, 45, who says she has been suffering from Long Covid since first having coronavirus near the start of the pandemic in March 2020. She receives physiotherapy for the pain, and said:

This isn’t my voice. This is my Covid chest. I’ve got a continuation of pressure in the chest and inflammation. I have quite severe swelling of joints and muscles, swelling of the soft tissue, and I haven’t come out the other side yet. I can’t run – I used to run. I did roller-skating, but I haven’t been on them since. I walk short distances around the park. It’s disappointing. Keeping fit keeps your mind fit so sometimes there’s a mental struggle.

Are We To Be the World's Greatest Force for Good or Not?

Are the Iran Nuclear Talks Designed to Fail?