The PLAN inducted the three ships—a guided missile cruiser, an amphibious assault ship, and a ballistic missile submarine—into service on April 23, with Chinese president Xi Jinping attending the ceremony on Hainan Island. The commission reflected the breakneck pace of China’s naval shipbuilding program, which has transformed the country’s navy from a meager coastal defense force into the second most powerful navy in the world in just 30 years.

➡ You love badass ships. So do we. Let’s nerd out over them together.

The Renhai-class guided missile cruiser, Yushen-class amphibious assault ship, and Jin-class ballistic missile submarine are some of the largest and most important warship types.

Guided missile cruisers typically act as bodyguards for aircraft carriers and amphibious ships, or form the nucleus of a surface action group of cruisers and destroyers. Amphibious assault ships deploy marines by both air and sea, while ballistic missile submarines allow a country to base its nuclear weapons in a (relatively) secure bastion secure from surprise attack.

China currently has the second most powerful navy in the world, second only to the U.S. Navy. But it wasn’t always this way.

In the 1980s, the PLAN consisted of a small number of obsolete destroyers complemented by hundreds of patrol craft and other short-ranged warships. As China’s economy grew, however, so did the PLAN, and today, the U.S. Department of Defense describes China’s Navy as operating 350 ships and submarines, including 130 major surface combatants, compared to the U.S. Navy’s 293 ships.

Despite former U.S. President Donald Trump’s promise to “rebuild the military,” the U.S. Navy will commission just seven ships in 2021. 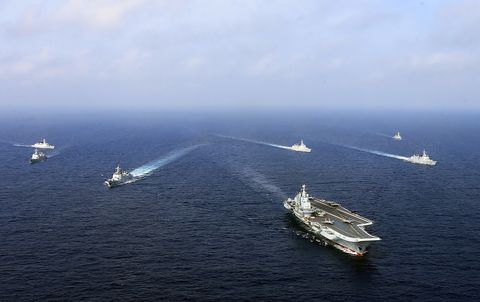 While the PLAN is numerically superior, nearly two-thirds of the warships are classes the U.S. Navy doesn’t even bother building, including diesel electric-powered submarines, missile boats, and corvettes. The overall weight of all the ships in the Chinese Navy is about 1.8 million tons, though that number is slightly dated and might even be up to 2 million tons. The U.S. Navy, on the other hand, weighs in at a whopping 4.6 million tons.

However, as China starts building larger and more capable ships, the U.S. Navy’s tonnage advantage is eroding. The three ships launched over the weekend represent 70,000 tons of warships. Let’s take a closer look at them. 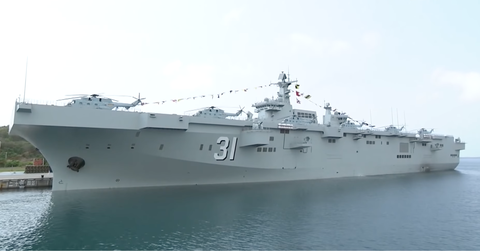 Kristen Stewart Is Calling Bullshit on Her Past

The Dalian is an amphibious landing helicopter dock ship, similar to the U.S. Navy’s Wasp class of ships. The Dalian comes from Hudong Zhonghua shipyard in Shanghai, and she’s the first of her class, with two other Type 075s under construction.

An amphibious landing helicopter dock ship looks like a small aircraft carrier, with features including a full-length flight deck, island superstructure, and elevators running between the deck and a hangar. The Dalian, according to the South China Morning Post, can accommodate up to 30 helicopters, including a mix of medium- and heavy-transport helicopters, attack helicopters, and utility helicopters.

The “dock” is a well deck, or a floodable drydock in the rear of the ship. The dock allows the Dalian to carry Type 726 helicopters, landing craft, and amphibious vehicles to load in a dry space, which is then flooded with seawater when it’s time to disembark. A landing helicopter dock like the USS Wasp or the Dalian can send marines ashore via helicopter and landing craft simultaneously. 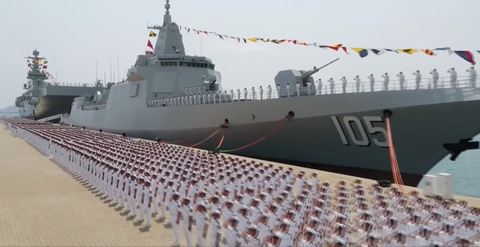 Hainan, the first of at least six Type 055 cruisers.

The Hainan is the first cruiser-sized ship built for the modern PLAN. The ship is often characterized as a destroyer, but the Pentagon’s 2020 China report labels it a guided missile cruiser. The Hainan displaces 13,000 tons fully loaded. That compares to the U.S. Navy’s Ticonderoga-class cruisers, which displace approximately 10,000 tons.

Like most modern warships, the Hainan counts its firepower in the number of vertical launch silos. The Renhai-class cruisers, of which there are at least six, each have 112 launch silos, compared to 90 to 96 for U.S. Navy destroyers or 122 for U.S. Navy cruisers. Silo-based armament allows a ship to carry a mix of weapons, including land attack cruise missiles, anti-ship missiles, surface-to-air missiles, and standoff anti-submarine weapons.

The Hainan, according to Naval News, also carries a 130-millimeter dual-purpose gun, a close-in weapon system similar to the U.S. Navy’s Phalanx CIWS, the HQ-10 short-range air defense system, decoy launchers, and torpedoes. Plus, the ship features a hangar and flight deck to embark at least one helicopter. 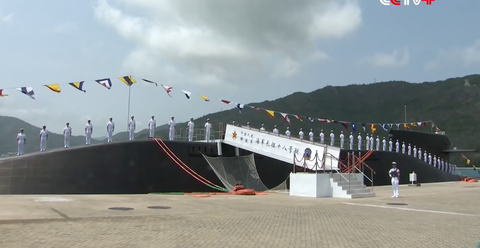 Caitlyn Jenner Calls Donald Trump a ‘Disruptor,’ Says She Is ‘All for the Wall’ in Sean Hannity Interview

Live-Streamer Signs off With “F*** the Police” Then Kills an NYPD Officer While Driving...