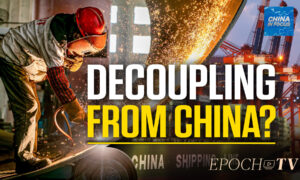 U.S. lawmakers are pushing to decouple from China as part of efforts to counter the Chinese Communist Party.

A key U.S. agency is getting a new climate cop who studied at a Beijing-controlled university. We dig into the official’s China ties.

Apple is expected to shift a quarter of its iPhone production to India by 2025. The country holds the world’s second-biggest smartphone market after China.

The U.S. army joins drills with allies in the Pacific. There, competition with Beijing over regional influence is heating up.

Topics in this episode:

Have other topics you want us to cover? Drop us a line: [email protected]

And if you’d like to buy us a coffee:

Subscribe to our newsletter for more first-hand news from China.

De-ESG, or Continue to Pay the ESG Tax

Mom shouting from the stands for her daughter to hit youth basketball player opponent...

White House ridiculed after walking back Biden’s statement that pandemic is over: ‘He is...

Vermont finishes lead testing on 98% of its colleges