Schwartzel finished a shot ahead of Henni du Plessis, who were both part of the Stinger GC side victorious in the Team Competition at Centurion Club; Schwartzel earns $4million for his victory and an additional $750,000 for being part of the winning team

Charl Schwartzel secured the biggest payday of his golfing career by surviving a back-nine wobble to claim a two-stroke victory in the inaugural event of the LIV Golf Invitational Series.

Schwartzel carded a two-over 72 at the Centurion Club to end the week on seven under and two clear of compatriot Henni Du Plessis, earning him the winners’ cheque of $4million.

The South African duo were both part of Stinger GC, who won the team competition alongside Branden Grace and Louis Oosthuizen, with the quartet all earning an additional $750,000 share of the $3million team first prize.

Schwartzel took a three-shot lead into the final round and saw his lead extended when Du Plessis bogeyed the sixth, with a Schwartzel birdie at the eighth seeing him reach the turn five ahead.

The former Masters champion hit a wayward tee shot at the par-four 12th on his way to an untimely double-bogey but made a two-putt gain at the par-five next to match Du Plessis’ birdie, before a bogey at the 14th dropped the overnight leader back to eight under.

A superb two-putt par from distance at the par-five 15th and a clutch par-save at the 16th kept Schwartzel two ahead with two to play, with a final-hole bogey enough for him to earn a first-prize nearly three times the figure he claimed for his major success in 2011.

“Honestly, I’m relieved!” Schwartzel said. “It was tough finishing there. I made a bad mistake on 12 which put me on the back foot and I needed to just stay calm and try and get this thing in the house and out of my hands. I made it a bit more difficult than it should’ve been, but I’m just proud of how I hung in and it [winning] is a great feeling.”

Grace carded a round-of-the-day 65 to finish on five under with Peter Uihlein, while England’s Sam Horsfield finished in fifth place ahead of Oliver Bekker and Adrian Otaegui, with Dustin Johnson ending the week in eighth spot on one under.

Oosthuizen and Graeme McDowell both ended the week on one over. Sergio Garcia finished on six over after a final-round 75, while Phil Mickelson signed off his first competitive start since February with a six-over 76 to end on 10 over.

Stinger GC won the team contest on 20 under, with the quartet finishing 14 shots clear of the Crushers GC side captained by Uihlein. The Majesticks GC team of Horsfield, Laurie Canter, Ian Poulter and Lee Westwood finished third on five under.

Where are future events taking place? 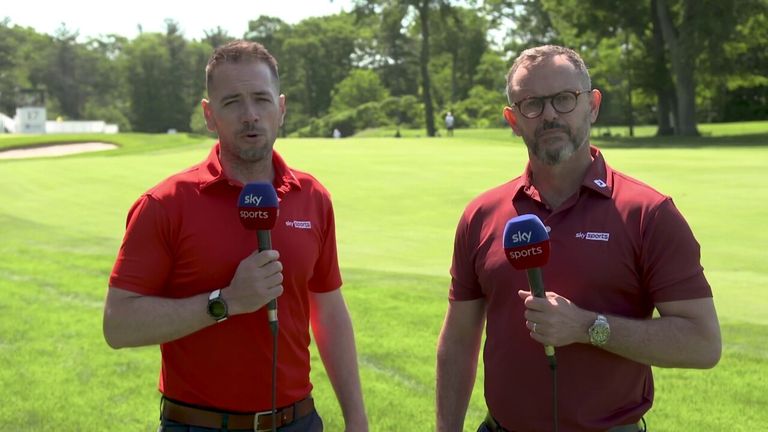 5 priorities for funders to support in refugee education

Sky Sports’ Andrew Coltart believes it won’t be long until bigger players’ heads are turned as they see lower-ranked players picking up big money on the LIV Golf Tour.

Sky Sports’ Andrew Coltart believes it won’t be long until bigger players’ heads are turned as they see lower-ranked players picking up big money on the LIV Golf Tour.

The inaugural event in England was the first of eight tournaments due to take place over the next few months, including five in the United States and two in Asia, with an expanded schedule then planned in the coming years.

Pumpkin Ridge GC in Portland from June 30-July 2 and Trump National Golf Club Bedminster from July 29-31 are the next two events, with further US-based tournaments taking place in Boston from September 2-4 and Chicago from September 16-18.

Stonehill Golf Club in Bangkok is the venue from October 7-9 and Royal Greens Golf Club – the site of the Saudi International in recent years – hosts the following week, with the season-ending Team Championship then hosted at Trump National Doral Miami from October 27-30.

Get the best prices and book a round at one of 1,700 courses across the UK & Ireland

In These Places, Most Kids Don’t Live With Their Dad