NASHVILLE, Tennessee — Country singer Brooke Eden shines with that glow that engaged people have as she counts down the days to her upcoming beachfront wedding, chatting about travel preparations and mother-in-laws bonding over text messages.

For the Florida-born singer, falling in love came hand-in-hand with learning to love herself as well. That meant taking care of herself after long stretches of touring left her physically ill, but also re-introducing herself to fans.

“This chapter of writing music was the first time that I was writing just for me,” said Eden, whose new EP, “Choosing You,” came out in July. “I was not writing toward what other people wanted me to say or what other people wanted me to write. I was really writing my heart, and it’s the first time that I really wrote like within this self-love chapter of my life.”

Eden released her first new music in years in 2021 with a trilogy of sunshiny singles, including the Motown-inspired “Sunroof,” in which she introduced the world to her longtime girlfriend, now fiancee, Hilary Hoover. Her follow-up EP this summer went deeper into the sound of soulful country pop as Eden explored her personal growth and resilience.

Eden talked to The Associated Press about her decision to publicly come out as queer, escaping toxic situations and having a viral moment with country star Trisha Yearwood. Responses have been edited for brevity and clarity.

AP: The track “Left You For Me” is about escaping a bad relationship because you’ve learned to love yourself first. What did that message mean for you?

AP: The EP is written from the perspective of someone in love and you got engaged to Hilary during the process. How much of the music is reflective of your personal life?

Eden: I write about love constantly because it’s something that was so foreign to me until I met my fiancee. Like, I never understood Taylor Swift until 6½ years ago because I was like, “Teardrops on your guitar?'” Like, girl, get over him. He’s a jerk, whatever. And now I’m like, Oh, my God. If that ever happened to me, I would be crying on my guitar, too! So love made me understand life so much more. And it helped me become a better writer. And I’m sure a better friend, more empathetic and understanding. And that goes into my songwriting. It’s really cool to get to write about it from a first-person perspective of this is what love should feel like and this is what love shouldn’t feel like. 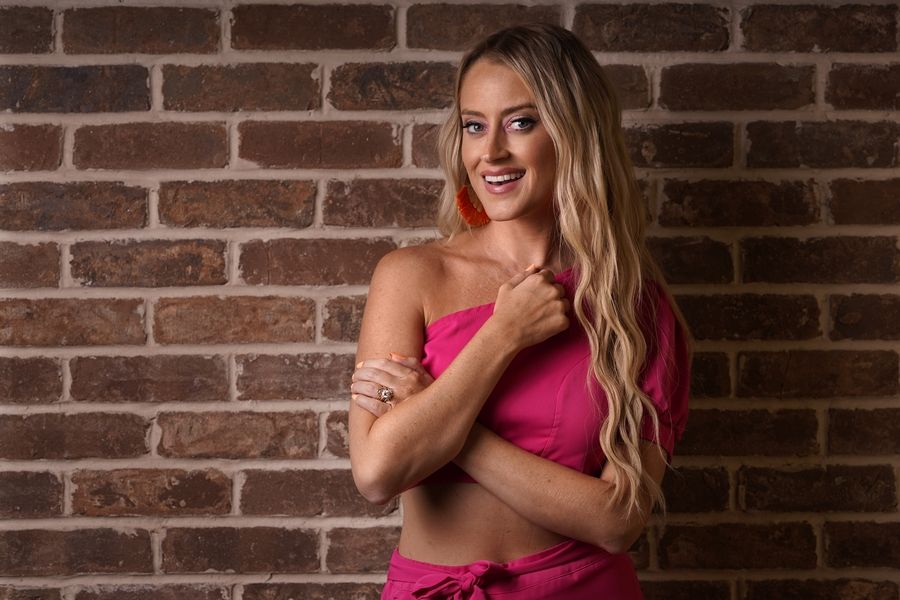 Country singer Brooke Eden, who released her new EP, “Choosing You,” in July, says that she makes her mental health a priority now.
– Associated Press

AP: What made you decide this was the time to come out publicly?

Eden: It took me five years of being in the best relationship of my life — with who I knew was the love of my life — even for me to finally come out. And so for me, it was a few different factors that went into me finally coming out. One was I was actually physically ill. I got ulcers in my small intestine that were not curable by medicine. They were only curable by me getting right with myself and becoming aligned with who I was. And so that was a big light bulb moment of like, “OK if I want to be a healthy human, I can’t just be physically healthy. I also have to be mentally healthy.” And you can’t be mentally healthy if you’re hiding a huge part of who you are … And I was reading a book called “Untamed” by Glennon Doyle, and she was talking about integrity and just clearly defined it as integrity is when you are to the world who you are in your home. And I realized that I was living my life with no integrity. And then I didn’t want to continue to live my life with no integrity anymore. So I hollered at Hillary, my fiancee, and I was like, “Babe, I just had this light bulb moment. I have to come out.” And she was like, “Finally, thank God, praise the Lord.”

AP: There was this video that was popular on social media last year of Trisha Yearwood introducing you at the Grand Ole Opry. And she changed the lyrics of her famous song “She’s in Love With the Boy” so you both could sing it. What does it mean to have her support you in that way?

Eden: She was like, “People have come up to me after shows and said, ‘Hey, don’t tell anyone, but I sing ‘He’s in love with the boy’ or don’t tell anyone, but I sing ‘She’s in love with the girl.'” And she’s like, “I’ve always wanted to have a moment for that, and I just don’t think that there could be a better moment than to celebrate y’all’s engagement and Pride Month and the 30th anniversary of this song.” … And just to get the reaction that we got from the Opry crowd, it just made me feel like a whole new wave of country music is happening and everyone’s invited and everyone has a place here. And there is a safe place here for the LGBTQ community and also other marginalized communities here in country music. … It was so huge. And to have someone as iconic as Trisha Yearwood be the mouthpiece of love is love and not just saying it, but actually putting action to those words. It meant the whole world.

America Needs a Fight Between Florida and California

Bill Maher pushes back at pro-choice alarmists: ‘We’re not going back to 1973’ if...

CNN Struggles To Find People In Wyoming Who Like Liz Cheney

I ‘Focus on the Real Problems’