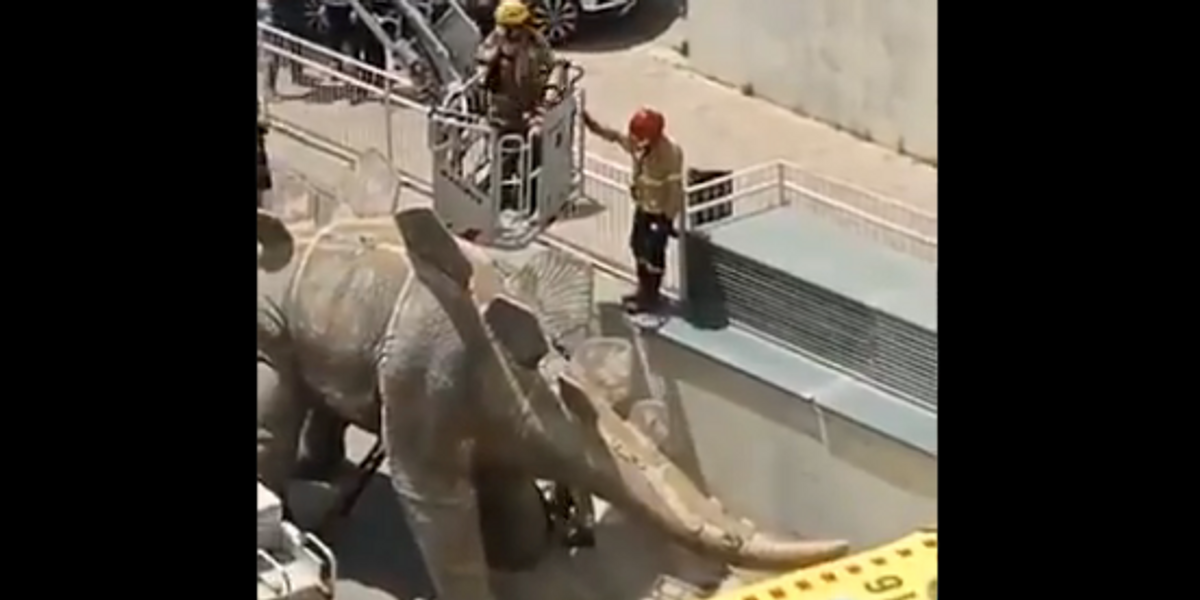 A 40-year-old man was found dead inside a large papier-mâché dinosaur statue in Spain after being reported missing by his family only hours earlier, multiple Spanish outlets reported over the weekend.

The man, whose identity has been protected, was discovered when a father and son who frequent the area alerted police after noticing a foul smell and seeing what they perceived to be a human leg through a crack in the statue, local news outlet La Vanguardia reported.

When firefighters arrived on the scene, they were forced to cut the statue open in order to remove the man’s corpse.

The Stegosaurus statue, which had been constructed as an advertisement for a since-closed movie theater, is located in Santa Coloma de Gramenet, a suburb of Barcelona.

A video posted to Twitter by Spanish media outlet El Mirall.net shows firefighters using a crane to approach the statue from above while others on the ground appear to use an electric saw to cut at its leg.

Catalonia police, called the Mossos d’Esquadra, reported to La Vanguardia that there were no “indications of criminality” in relation to the incident and that they were awaiting an autopsy to officially determine the cause of the man’s death.

According to local reports, police, initially suspecting the man to be homeless, believed that he had crawled into the statue to spend the night before getting trapped.

But upon learning that a missing persons report had been filed, police ruled out the possibility that the man was homeless. They now posit that he may have somehow dropped his cellphone inside the statue before flipping upside down and getting stuck trying to retrieve it.

Citing El Periódico, Newsweek reported that the man’s family reported him missing after he had been away from them for two days.

The dinosaur, which was the last of several promotional decorations on display nearby the theater, has reportedly been removed from the area.

Economies in the Financial Spotlight in 2021