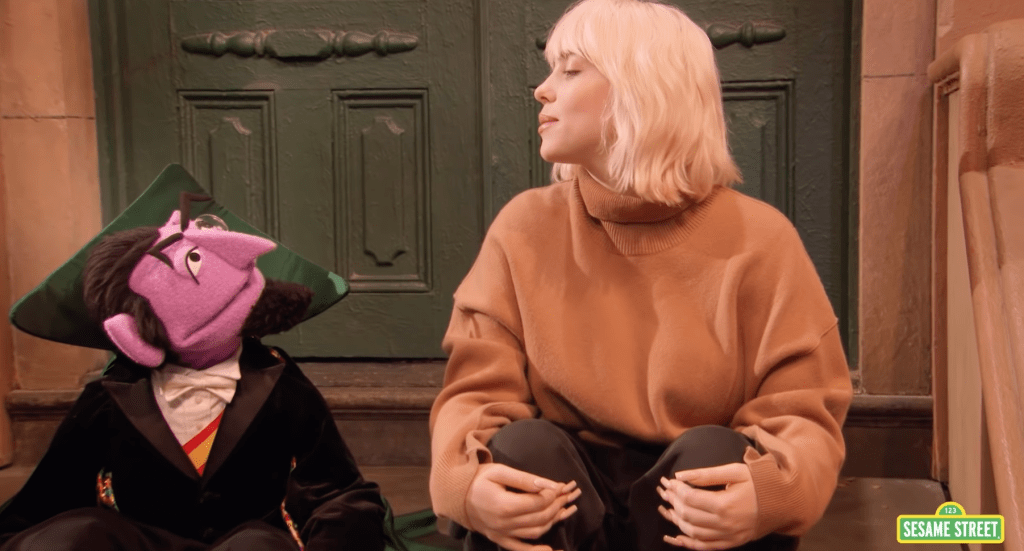 Billie Eilish sang a special rendition of her hit song “Happier Than Ever” on “Sesame Street” with the Count, and posted the happy collab all over social media.

In the music video, Eilish is joined by the Count as she sings, “When I’m counting with you, I’m happier than ever.” The Count responds in song: “Numbers sound so much better.” The two begin counting various items together, including two of Burt’s sweaters, two taps of tap shoes and two apples. Elmo joins in song as well, singing, “This one’s for you” as he hands a girl an apple. The song closes with Eilish and the Count singing the final chorus together as they count to two. “The number two!” remarks the Count, as the video closes to his maniacal laughter and thunder storming overhead. Other “Sesame Street” characters featured in the video include Big Bird, Burt and the Two-Headed Monster.

(Parents who are overseeing young children just learning to spell may be glad to know that this version of “Happier Than Ever” does not include the F-word heard in Eilish’s album version.)

The Eilish/Count duet bolsters excitement for the upcoming 52nd season of “Sesame Street,” which debuts on Nov. 11 on Cartoonito on HBO Max. The episode in which Eilish appears is scheduled for June 16, 2022.

“Sesame Street” Season 52 will air a new episode every Thursday on HBO Max and weekly on PBS Kids. In addition to Eilish, this season’s guests include Jon Batiste, whose episode airs Nov. 18; Kacey Musgraves, who will appear on the Dec. 2 episode; Naomi Osaka, who is scheduled to debut Jan. 6, 2022; Anderson .Paak, whose episode will air Jan. 13, 2022; Dr. Mae Jemison for the March 24, 2022 episode, and Keke Palmer, whose episode will air April 21, 2022.