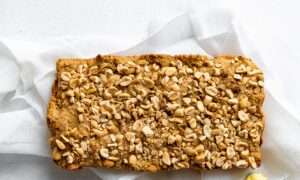 During World War I, much of the wheat crop grown in the United States was sent to Europe, both to provide nourishment for soldiers and to satisfy the hunger of Allied civilians who faced starvation after years of war. Accordingly, this created a shortage on the homefront, and the State Council of Defense encouraged homemakers to minimize their usage of wheat.

This Barley Bread is inspired by the mildly sweet quick bread recipes in “What to Eat and How to Cook It,” a 1918 government-issued cookbook on wartime cooking.

Line a 1-pound loaf pan with parchment paper, and preheat the oven to 350 degrees F.

Is Your Sentence a Run-On? – About Writing: A Guide

Whisk the barley flour, baking powder, salt, and cinnamon to combine. Beat in the butter, honey, milk, and egg until well combined.

Scrape the batter into the prepared pan, then drizzle the maple syrup over the batter, and sprinkle with the chopped peanuts.

Bake for about 50 minutes, or until a toothpick stuck into the center of the loaf comes out clean.

Get Ready for the Return of the Abortion Novel