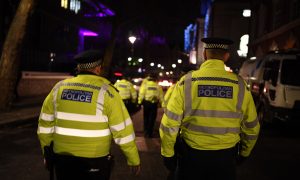 A 16-year-old boy was arrested on Thursday on suspicion of the murder of a 15-year-old in Huddersfield, England.
The teenager was stabbed outside his school on Wednesday afternoon and was treated at the scene before being taken to hospital where he later died, police said.
The murder has rocked the west Yorkshire town and the pupils of North

Huddersfield Trust School.
One of the pupils, Alfie Wilkinson, visited the school on Thursday to lay flowers at the scene.
“Great student, great kid and now he’s passed and he can’t see his mum no more,” Wilkinson told British broadcaster Sky News….

Gays In opposition to Groomers Is Huge Tech’s Newest Goal