Unless the Supreme Court turns into Brave Sir Robin, Roe vs. Wade, Doe vs. Bolton, and Planned Parenthood vs. Casey will rest alongside Dred Scott and Plessy vs. Ferguson in the worm pit of legal decisions that disgrace America. Based on the leaked opinion authored by Justice Samuel Alito (Politico Tries to Pre-Game SCOTUS by Publishing Leaked Draft Opinion Overturning Roe), at least five justices favor burning down the entire rotten pseudo-legal framework that resulted in about 50 million American citizens killed in the womb.

The uprooting of this corrupt and horrific jurisprudence has been the cause for soul searching. In the case of pro-aborts, that is particularly crucial as they have lost their souls, and they are in search of are exceedingly small and elusive.

There are some who are also concerned about the future of the pro-life movement, so concerned that they see its future as a leftist lobbying organization. The following quote is from a New York Times op-ed titled If Roe Is Overturned, Where Should the Pro-Life Movement Go Next? The author is Tish Harrison Warren, who describes herself as “An Anglican priest reflects on matters of faith in private life and public discourse.” (I confess that I’m firmly aligned with English playwright and essayist Samuel Johnson, who said, “Sir, a woman’s preaching is like a dog’s walking on his hind legs. It is not done well; but you are surprised to find it done at all.”) I don’t know the author’s opinion on Roe or abortion, but she seems to be some sort of pro-lifer. She sees the fight against the evil of abortion as only a starting point for the pro-life movement.

Pro-life activists have been working toward overturning the Supreme Court’s Roe v. Wade decision ever since it came down in 1973. But as I spoke to folks from pro-life and whole-life movements last week after the leak of a draft opinion that indicated the court will overturn Roe, the mood was complicated. I did not find unalloyed jubilance or triumph.

Most people I talked to expressed cautious optimism and hope but also concern. This was in part because they worried that the court’s draft opinion may shift in weeks to come. But more so because those who take a holistic approach to reducing abortion feel that legally restricting abortion, while a win for justice and the voiceless and vulnerable, is not alone enough to create a culture that is holistically pro-life and addresses the needs of both women and unborn children.

The sense I got is that, for many pro-life and whole-life leaders, this Supreme Court decision would represent a starting line, not a finish line. There are no credits rolling with a victorious pro-life movement marching into the sunset. One activist told me, “I feel joy and relief, but it is kind of like the joy and relief one feels in getting into college, being cast in the school play or making the varsity team. The conditions for the possibility of achieving the goal have been met, but there’s so much more hard work to do.”

What does this “culture that is holistically pro-life and addresses the needs of both women and unborn children” look like? This is what  Harrison Warren advocates.

…Paid family leave is the recognition of basic reality: New mothers need time to rest and heal; all parents and caregivers need time to care for and bond with children. Every baby, wanted or unexpected, should be welcomed; every parent’s labor as a parent should be recognized.

Address the elephant in the room

…Now is the time to get to work and create a world that supports and protects not just the unborn person in the womb but also the equally human and valuable people carrying them. The place we should’ve been directing a majority of our efforts all along: housing, child care and transportation…

Studies show that restricting abortion leads to increased use of contraception and a decrease in risky sexual behavior. The pro-life movement can encourage these trends by promoting effective pregnancy prevention methods. That should include offering vasectomies for “bro-choice” men; after all, it takes two to tango.

Build a coalition of people with different views on abortion

The urgency of this matter disproportionately affects communities of color. The burden of responsibility to provide aid lies with both pro-life and pro-choice advocates who must set aside their differences and work together to boldly advocate the social services that will ensure care for both mother and child. If pro-lifers do not respond, it exposes our true intentions, which is moral high ground, instead of an invested interest in the flourishing of mother and child.

Economically disadvantaged women get hit with the proverbial double whammy when it comes to abortion. They are much more anti-abortion, on average, than those in more privileged classes. But they are also much more at risk from interrelated structural pressures that lead to many abortions: intimate partner violence, food insecurity, lack of child care options, limited job prospects, poor housing, mass incarceration and more.

I think this discussion is premature and fatuous.

First, all eradicating Roe does is give the pro-life movement the ability to fight. The end of Roe means abortion will still be completely legal, in some form, in the whole country except for the 13 states with so-called “trigger bans.”

Without the specter of Roe and the fascists who support it, we will be free to take the fight to the 37 states permitting abortion. I’m confident there is more than enough work to be done.

As to the specific things Harrison Warren advocates, they are primarily the same tired socialist proposals that were in vogue before LBJ’s Great Society; their objective is the infantilization of single mothers and the funding of a massive social service bureaucracy. We know that the government programs that attempt to implement these plans don’t produce anything but more poverty and more bureaucrats. What is more disturbing is that she is essentially pushing the same slander that we on the pro-life side have heard from the pro-aborts for years, that is, that we don’t care about the baby after it is born.

What is missing from Harrison Warren’s critique?

Family, for one. At no point does she encourage marriage or not banging everything in sight. Men are marginalized in our society. They earn fewer than half of all college degrees. 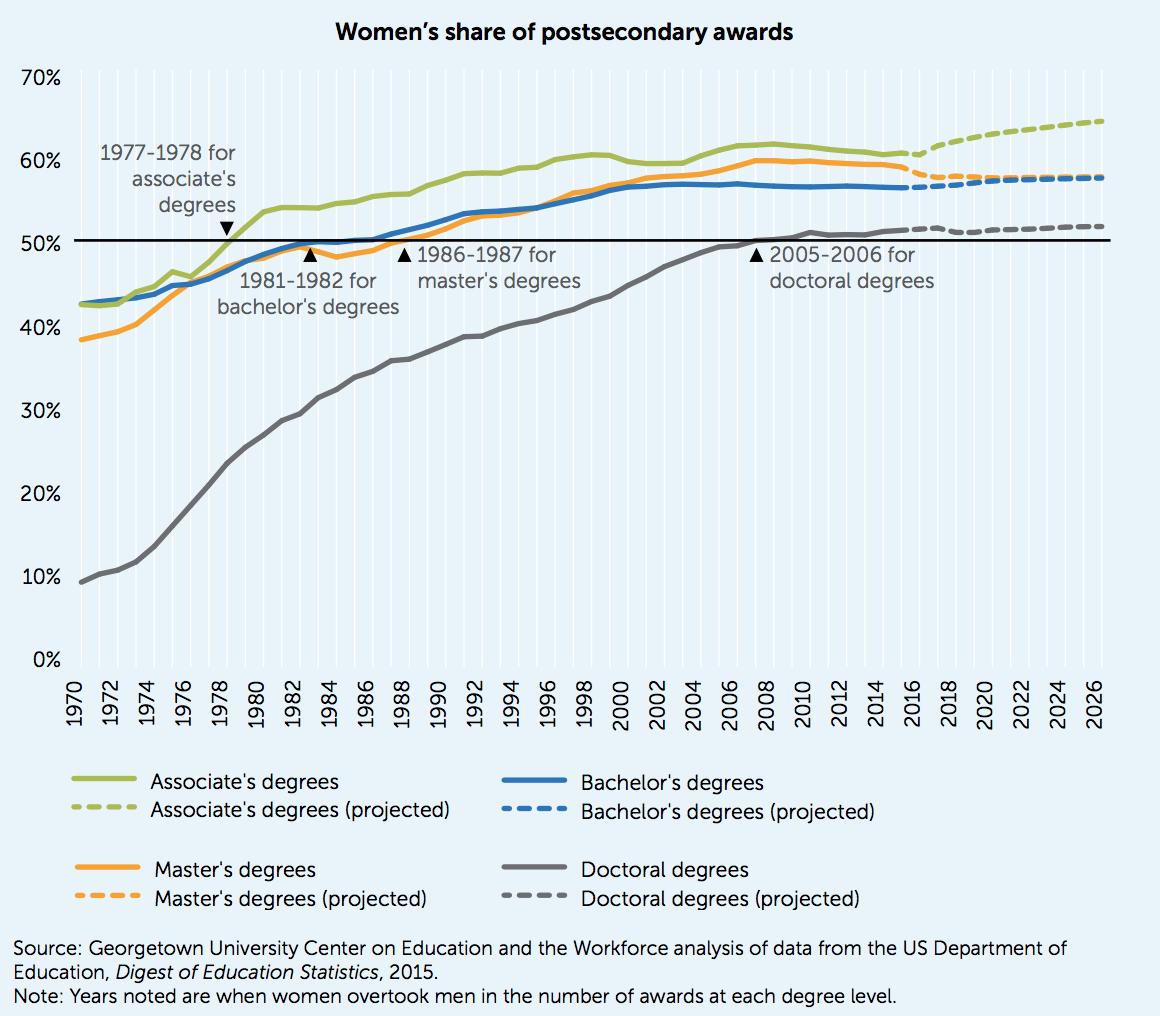 They are more likely to drop out of school, participate in the workforce, use drugs, and be involved in serious crimes.

The focus on “empowering economically disadvantaged women” totally misses the cultural genocide being wrought on our young men. If it “take two to tango,” maybe being married to a man who has earning ability is a better solution for father, mother, and child than being enrolled in a government program that will penalize the woman through loss of entitlements, if she does get married or improves her economic status. Maybe, hear me out, a committed relationship is better socially, economically, and psychologically than a hook-up app. Perhaps addressing the “demand” part of the equation instead of monomaniacally focusing on the “supply” issue is in order.

Maybe someone who professes to be a priest (I know, calling Anglicanism in America a religion is a stretch but play along with me) should be carrying out the Great Commission instead of preaching the Gospel of Caesar. (While we’re at it, can we please stop redefining Scripture into whatever bullsh** we want to believe; widow means widow, it doesn’t mean “vulnerable women.”) When you have women bemoaning the end of the “hook up” culture because of restrictions on abortion (see The Darker Side of ‘Feminism’ Slithers out in TikTok Rants Fretting Over Roe v. Wade Future), that cultural sickness is more a problem than economics. Evangelizing is hard work, but the fact is that without some religious foundation, without changing hearts, trying to change the culture is a lost cause. I was stunned that a priest (even an Anglican) could approach an issue so profoundly intertwined with orthodox Christianity as abortion and not call for greater involvement by churches in assisting pregnant women. Totally anecdotal, but my experience is that those churches with the most robust pro-life ministries are also very likely to be actively involved in helping pregnant women in all aspects.

Perhaps making common cause with pro-aborts is a really, really stupid idea. Social movements are subject to the Iron Law of Bureaucracy, the same as any government agency. That law is “in any bureaucratic organization; there will be two kinds of people: those who work to further the actual goals of the organization, and those who work for the organization itself. The Iron Law states that in all cases, the second type of person will always gain control of the organization and will always write the rules under which the organization functions.” I don’t have to tell you in which category you’d find the pro-aborts and where those folks who’ve spent decades on the picket lines would be. Inviting pro-aborts into the pro-life movement, unless they’ve had an “Abby Johnson moment,” serves no useful purpose.

It is said that every cause starts out as a movement, then it becomes a business, and finally, a grift. Since Roe became law, the pro-life movement has stayed true to its founding vision (with some exceptions). There is a lot of work to be done, but, unlike just a year ago, you can now visualize a time when abortion will be illegal in most states, and normal people will recoil in horror at the idea of killing a baby because it is inconvenient. We should all look forward to that day when we can say our work is done. We’ve eradicated abortion and changed the culture so that families are stronger and single mothers have a safety net that does not involve a caseworker and a handout. And then we should lock the doors and turn out the lives and go back to our homes, churches, and communities and sustain what we have accomplished by how we live our lives.

No, reversing Roe doesn’t mean the work of the pro-life movement is over; neither does it mean that we become campaigners and salesmen for the administrative state.