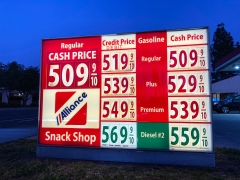 Following the release of the Bureau of Labor Statistics June Consumer Price Index (CPI) report, which showed a 9.1% increase in prices over the past 12 months—higher than many analysts anticipated—the Brookings Institution and Bipartisan Policy Center convened a panel of experts to discuss the implications for the economy. You can read five key takeaways below, and listen to the full discussion here.

The headline numbers were alarming, and so were the details

“The news today was a bit alarming,” said Hutchins Center Director David Wessel, who moderated the discussion. Consumer prices in June rose 1.3% over May, and core CPI rose 0.7%. Over the last 12 months, the CPI increase was the fastest since 1981. “By any measure this a lot of inflation, and already we’ve seen financial markets are now putting a 30% chance on the possibility that the Federal Reserve will raise interest rates a full percentage point at its next meeting,” said Wessel.

“I found the numbers also pretty alarming but not just because of all of the headline numbers … but actually some of the detail worried me more,” said Wendy Edelberg, director of The Hamilton Project at Brookings. “I expected to see big numbers in energy. I expected to see big numbers in shelter. But I was hoping to see softer numbers, and possibly, in my in my wildest dreams, outright declines, in core goods, and we didn’t,” said Edelberg. “One of the reasons that worries me so much is that we are actually seeing softer demand and higher inventories for a lot of different goods in these categories.” Economic models would predict that this combination would result in lower inflation, said Edelberg. “And it looks like it hasn’t.”

“I found the numbers also pretty alarming but not just because of all of the headline numbers … but actually some of the detail worried me more.”

A “bad news” scenario, Edelberg said, would be a rise in businesses’ inflation expectations, which would lead to pre-emptive price hikes. On the “good news” side, we could still be seeing the effects of higher commodity prices earlier this year, she explained. “So we just need to sit tight and we really will see prices come down as what we think the normal factors that should drive inflation down really take hold,” she said.

There’s some hope for businesses and workers looking forward

Justin Wolfers of the University of Michigan offered two views of the latest report: one, agreeing with Edelberg and Wessel that it was a “no good, very bad, horrible inflation report,” but a second looking forward at costs for businesses, where he saw some hope in relatively low increases in labor costs and July’s decline in energy costs. “Looking forward, the fundamentals still seem to suggest—I hate to use this word again but—inflation is transitory. The only thing that we’ve learned is during a pandemic, the word transitory means ‘twice as long as we used to think transitory meant.’”

And for workers, while wages not keeping up with costs will hurt households in the short run, in the medium run they will catch up, said Wolfers.

“The reality is that in five years’ time wages will have fully accounted for all of what’s happened to prices. That might seem like a crazy sort of a forecast, but it’s more than that; it’s a promise. Because in every country around the world, in every historical episode, whenever prices rise, wages tend to follow. What we’re in is that awkward moment when prices have risen, but wages haven’t yet caught up.”

Gasoline prices will tick down, but not drop much without policy changes

Xan Fishman, director of Energy Policy and Carbon Management at the Bipartisan Policy Center, highlighted the importance of energy prices in the CPI. They rose 7.5% in just one month alone, and are up nearly 42% over the past 12 months. “It’s pretty clear when you look year over year at energy prices that it’s a big piece of the inflation package that is really felt by the average person, the average household, especially when you have something as salient as gasoline prices that are up there on the billboard everywhere you drive, every time you fill your tank,” said Fishman.

While gas prices ticked down in early July and will likely continue to do so, Fishman said we shouldn’t expect prices to decline to 2021 levels without significant investments, which will require certainty about the future of energy policy in the U.S.

“So as we think about what’s next, I encourage all policymakers to think about the long term, decarbonization, energy affordability, and energy security and reliability, all in one package, because those are the policies that are going to allow the private sector and individuals to make the long-term investments in their next vehicle, their next fuel source, their next power plant, that are going to actually get us from where we are now to a world in which we have affordable energy that is actually decarbonized.”

Dennis Shea, executive director of the J. Ronald Terwilliger Center for Housing Policy, explained that the CPI’s shelter measure combines rent (that is, what tenants pay their landlords) and owner’s equivalent rent (which is an estimate of what a homeowner forgoes by not renting an owner-occupied home to someone else). “Changes in inflation lag real time changes in housing costs because the CPI captures current rents paid, as opposed to advertised rents for newly vacant units, and leases and mortgages, as you know, typically last, a rental lease 12 months or more and mortgages, 15 or 30 years,” said Shea. “So we should, I think, continue to expect significant contribution of shelter costs to the CPI going forward.”

As to what’s been driving prices up, Shea said it’s primarily a supply issue. “There’s a supply-demand mismatch. There’s much more demand than supply, and the estimates vary as to what the supply shortage is,” said Shea, ranging from 1.5 to 3.8 million units according to different analyses. “So we really need to embrace policies … to increase the supply of homes.”

Several futures are still possible, from soft landing to recession

“The outcome which would be far more problematic is if the economy slows and inflation doesn’t come down because what that means is that the Fed’s got a problem on its hands with either inflation expectations being too high or a series of really bad supply shocks coming over and over that are pushing prices up ever higher, which is essentially saying our economy has less ability to grow, and in both circumstances, the Fed’s going to probably react by slowing the economy much more dramatically.”

Even a mild recession will lead to economic pains for many households, but Edelberg explained why some slowing is necessary. “The economy needs to slow because it’s trying to do more than it can do,” said Edelberg. “So a couple of quarters of slowing, or, you know, three quarters of slowing, will help our economy take a breath after the craziness of the past year and a half.”